Portugal has requested the loan of two water-bombing planes as winds revived massive wildfires in a central region where dozens of people were killed in huge blazes in 2017.

Portugal's civil protection agency had said this morning the wildfires were "90% controlled" but officials said they were reactivated when winds picked up in the afternoon.

"During the morning it was practically controlled but weather conditions did not allow a consolidation of the situation," Prime Minister Antonio Costa told journalists.

In response to a demand from Lisbon, Spain sent two heavy amphibious aircraft to help fight the blazes which broke out on Saturday amid scorching temperatures, the interior ministry said.

The European Union said it was willing to offer aid as well if Lisbon asked.

Nearly 1,300 firefighters backed by 17 water-dropping aircraft were deployed to fight the blazes in the heavily forested Castelo Branco region, 200km northeast of the capital Lisbon.

A firefighter and an emergency services worker were injured today, the civil protection agency said, bringing to 32 the number of people hurt by the flames.

Most suffered smoke inhalation but a civilian was evacuated to a Lisbon hospital with serious burns.

Exhausted firefighters regularly poured water over their heads to cool off as temperatures neared 40C. 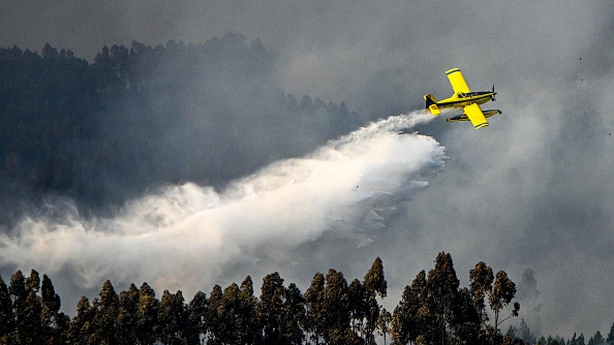 "Yesterday we thought we were done, it was completely extinguished, then suddenly the fire resumes with this wind, we can't believe it," Fernando Almeida told AFP in the village of Casais de Sao Bento as he filled a huge tank in his garden, which a helicopter used to pick up water to fight the blaze.

While a number of small villages were evacuated as a precaution, officials said they still did not know how many homes were damaged.

Authorities are looking into whether the fires may have been started deliberately as several blazes broke out at roughly the same time near each other, Interior Minister Eduardo Cabrita said yesterday.

Police said a 55-year-old man had been arrested in Castelo Branco suspected of setting a fire on the outskirts of the town, though this one was far from the main fires.

Seven regions of Portugal have been on fire alert today because of the dry weather and high temperatures.

The centre of Portugal is hilly and covered in dense forest and is regularly ravaged by fires, including the deadliest in the country's history when 114 people died in two separate blazes in June and October 2017.

Much of the population in the area is elderly, as young people move to the cities.

The forests are largely eucalyptus, a highly flammable wood used in the paper industry.

Despite the combustion risks, the trees are planted because they are fast-growing and a major source of income for locals.

With fields and pastures abandoned, the forests are poorly maintained, and the dense undergrowth facilitates the spread of the fires.

This, combined with the huge amount of "combustible material" in the country's forests, has created a "very strong cocktail to generate wildfires with enormous releases of energy", he said.

According to the EU's European Forest Fire Information System, more than 250,000 hectares of land was destroyed by fire across Europe between January and April this year, compared with 181,000 hectares recorded for the entire fire season in 2018.