The World Health Organization has declared the Ebola outbreak in the Democratic Republic of Congo a "public health emergency of international concern," a rare designation only used for the gravest epidemics.

The Ebola epidemic in DR Congo, the second deadliest on record, has largely been contained to remote areas, but this week saw a patient diagnosed with the virus in the eastern city of Goma, the first case in a major urban hub.

"It is time for the world to take notice," WHO chief Tedros Adhanom Ghebreyesus said in a statement, as he accepted the advice of his advisory board to invoke the emergency provision (PHEIC), activated by the UN health agency four times previously.

The International Federation of Red Cross and Red Crescent Societies said it "welcomed" the decision.

"While it does not change the reality on the ground for victims or partners engaged in the response, we hope it will bring the international attention that this crisis deserves," the IFRC said in a statement.

The Ebola epidemic began in DRC nearly a year ago and has since killed more than 1,600 people.

WHO has on three previous occasions held off making the emergency call for the outbreak centred in the eastern DRC provinces of Ituri and North Kivu.

But the emergence of a case in North Kivu's capital Goma, which borders Rwanda, escalated the severity of the crisis.

Tedros this week called the Goma patient a "potential game-changer," because the city was a "gateway" to Africa's Great Lakes region and the wider world.

The Goma patient has been described as an evangelical preacher who had travelled from the city to Butembo, one of the towns hardest hit by Ebola.

He had reportedly touched several Ebola patients and concealed his identity in order to evade health screenings while on route to Goma.

The emergency committee cited the patient, who has died, as a "specific cause for concern".

"There are worrying signs of possible extension of the epidemic. Despite significant improvement in many places, there is concern about potential spread from Goma," it said.

Goma is a border city of about one million people located on the northern shore of Lake Kivu, adjacent to Rwanda's town of Gisenyi.

It has a port that links to Bukavu and South Kivu province and an airport with flights to Kinshasa, the Ugandan capital Entebbe and Addis Ababa, the capital of Ethiopia. 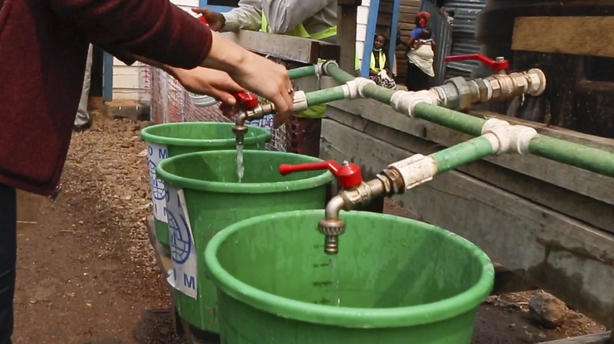 At the Goma-Gisenyi crossing, megaphone announcements instructed all travellers to wash their hands "to prevent Ebola sickness virus," using basins of water with added bleach.

The WHO's international health regulations, drafted in 2005, say that the international emergency label should apply to a situation that is "serious, unusual or unexpected; carries implications for public health beyond the affected State's national border; and may require immediate international action".

A main concern in making the emergency call is the fear that other states will close their borders in order to protect their populations.

The head of the WHO emergency panel, Robert Steffen urged against any border closures.

"It is... crucial that states do not use the (emergency declaration) as an excuse to impose trade or travel restrictions, which would have a negative impact on the response and on the lives and livelihoods of people in the region," he said in a statement.