A comment made by Jo Brand on BBC Radio 4 about throwing battery acid at politicians is being assessed by the Metropolitan Police following an allegation of incitement to violence.

The Met said in a statement: "Police have received an allegation of incitement to violence that was reported to the MPS on 13 June.

"There have been no arrests and inquiries are ongoing."

The comedian made the joke on Victoria Coren Mitchell's Heresy programme on Tuesday night, but has been criticised for inciting violence by Brexit Party leader Nigel Farage among others.

Theresa May's official spokesman said: "The prime minister has been repeatedly clear that politicians should be able to go about their work and campaign without harassment, intimidation or abuse.

"I note that Brendan Cox [husband of murdered MP Jo Cox] has said that violence and intimidation should not be normalised and we should consistently stand against it.

"The prime minister shares this view. It is for the BBC to explain why it considers this to have been appropriate content for broadcast."

A BBC spokeswoman said: "Heresy is a long-running comedy programme where, as the title implies and as our listeners know, panellists often say things which are deliberately provocative and go against societal norms but are not intended to be taken seriously."

In reply to a question about the state of UK politics, Ms Brand had told the programme: "Well, yes, I would say that but that's because certain unpleasant characters are being thrown to the fore and they're very, very easy to hate and I'm kind of thinking 'Why bother with a milkshake when you could get some battery acid?'

"That's just me. I'm not going to do it, it's purely a fantasy, but I think milkshakes are pathetic, I honestly do, sorry."

In a tweet on Wednesday, Mr Farage accused Brand of inciting violence, although he did not say who against.

He wrote: "This is incitement of violence and the police need to act." 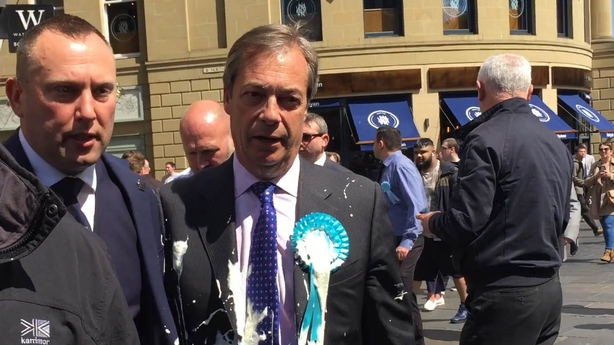 Last month, Mr Farage was showered with milkshake during a campaign walkabout in Newcastle city centre.

He was heard to comment "complete failure" and "I could have spotted that a mile off" as he was ushered away by security officers following the incident.

The trend of throwing milkshakes at right-wing politicians began when viral footage showed Tommy Robinson having one thrown over him in Warrington.

Since then, several other members of the public have attempted to repeat the unusual protest in an apparent tribute to the original culprit.

Broadcasting watchdog Ofcom said it has received 65 complaints about the episode of Heresy.

At the end of show, Ms Coren Mitchell said she hoped Ms Brand's remarks had not caused offence, but added that the radio series had been set up to "test the boundaries of what it's OK to say and not say".