The mystery incident, the second involving shipping in the strategic sea lane in only a few weeks, came amid spiralling tension between Iran and the US, which has pointed the finger at Iran over earlier tanker attacks in May.

The Norwegian Maritime Authority said three explosions were reported on board the Norwegian-owned tanker Front Altair after it was "attacked" along with the Singapore-owned ship Kokuka Courageous.

Iran said its navy had rescued 44 crew members after the two vessels, which were carrying highly inflammable material, caught fire.

TV images showed huge, thick plumes of smoke and fire billowing from one of the tankers as it lay out to sea.

However, US Secretary of State Mike Pompeo accused Iran of being behind the attacks and said it was taking the case to the UN Security Council.

"It is the assessment of the United States that the Islamic Republic of Iran is responsible for the attacks," Mr Pompeo told reporters.

"This is based on intelligence, the weapons used, the level of expertise needed to execute the operation, recent similar Iranian attacks on shipping, and the fact that no proxy group operating in the area has the resources and proficiency to act with such a high degree of sophistication."

Mr Pompeo said Iran "promised" on 22 April to disrupt oil shipping from the Strait of Hormuz.

"It is now executing that promise," he said. 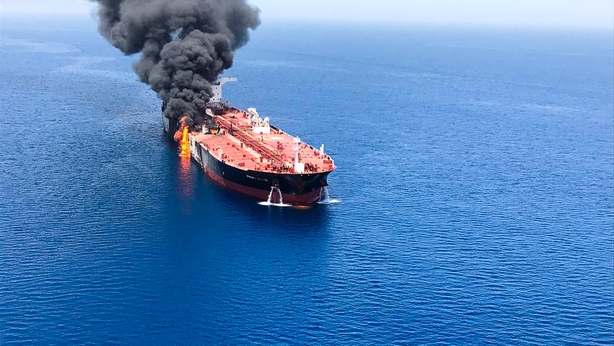 The US Fifth Fleet said its warships had received distress calls from both vessels in a "reported attack".

Iranian state media said the first incident occurred on board the Front Altair at 8.50 am (5.20am Irish time) 25 nautical miles off Bandar-e-Jask in southern Iran.

The Marshall Islands-flagged tanker, a 111,000-tonne vessel, was carrying a cargo of ethanol from Qatar to Taiwan, official news agency IRNA reported.

"As the ship caught fire, 23 of the crew jumped into the water and were saved by a passing ship and handed over to the Iranian rescue unit," it said.

"An hour after the first accident the second ship caught fire at 9.50 am 28 nautical miles off the port."

"I can confirm that the vessel has NOT sunk," Robert Hvide Macleo, chief executive for the ship's owner Frontline, wrote in a text message to AFP. No injuries were reported.

The Panama-flagged Kokuka Courageous was headed to Singapore from Saudi Arabia with a cargo of methanol, and 21 of its crew jumped and were rescued, IRNA said.

"The 21 crew of the vessel abandoned ship after the incident on board which resulted in damage to the ship's hull starboard side," it said.

"One crew man from the Kokuka Courageous was slightly injured in the incident and is receiving first aid."

It said the vessel was about 70 nautical miles from the United Arab Emirates and just 14 from the coast of Iran. 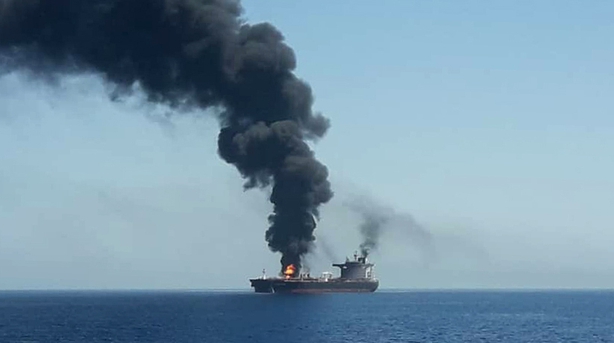 The incident came as Japanese Prime Minister Shinzo Abe was on an unprecedented visit to Iran, seeking to defuse tension between the US and Iran.

Iran said it has dispatched a helicopter from the port of Bandar-e-Jask to the ships' location for "further investigation".

The US Fifth Fleet said: "We are aware of the reported attack on tankers in the Gulf of Oman.

"US naval forces in the region received two separate distress calls at 6.12 am local time and a second one at 7.00am."

World oil prices spiked after a merchant shipping information service run by Britain's Royal Navy reported an "incident" in the Gulf of Oman.

"Tension across the Middle East is high, and the attacks on two tankers has further exacerbated the situation, even though there does not appear to have been any damage to the cargos," said John Hall, chairman of British-based consultancy Alfa Energy.

Global oil prices gained around 4% immediately after the reports of the attack. Benchmark Brent oil was trading at $61.74 a barrel, up about 3%.

The European Union called for "maximum restraint" to avoid an escalation in the region.

The Gulf of Oman lies at the other end of the strategic Strait of Hormuz from the Gulf.

It is part of a vital shipping lane through which at least 15 million barrels of crude oil and hundreds of millions of dollars of non-oil imports pass.

On 12 May, four oil tankers - two Saudi, one Norwegian and one Emirati - were damaged in still unexplained attacks in the Gulf of Oman off the United Arab Emirates.

US National Security Advisor John Bolton said Iranian naval mines were almost certainly behind those attacks, but declined to provide specific evidence that Iran was involved.

The UAE said last week that initial findings of a five-nation investigation delivered to the United Nations pointed to the likelihood that a state was behind the bombings, but added there was no evidence yet that Iran was involved.

The initial findings showed that it was "highly likely" that four Limpet mines, which are magnetically attached to a ship's hull, were used in the attacks, placed by trained divers who were deployed from fast boats.

The latest attacks have led to international condemnation, with the British government saying the attacks were completely unacceptable and it was ready to assist in any investigation.

He also warned that the world cannot afford "a major confrontation in the Gulf region".

The UN Security Council is due to meet behind closed doors to discuss the situation.