Clashes broke out shortly the deadline protesters had given for the government to abandon a controversial bill that would allow extraditions to China.

Protesters using umbrellas as shields could be seen trying to get closer to riot police protecting the Legislative Council building, with projectiles thrown at officers.

Protesters "must stop the violence", police chief Stephen Lo said, warning residents to stay away from a "riot situation". He confirmed police were using plastic bullets. 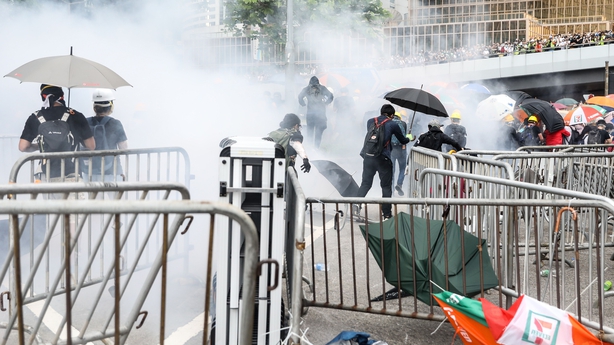 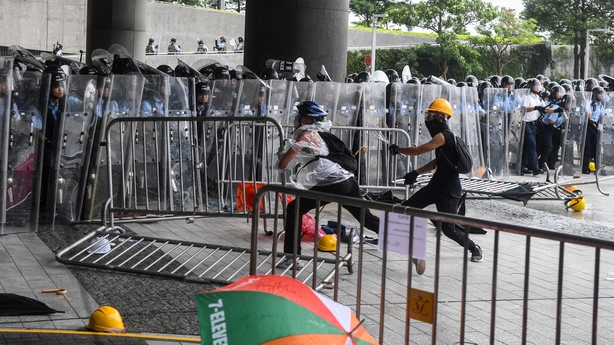 Tens of thousands of people have paralysed central Hong Kong, blocking major roads in a defiant show of strength against the extradition bill.

Black-clad demonstrators, most of them young people and students, surrounded government offices, bringing traffic to a standstill as they called on authorities to scrap the Beijing-backed plan.

Why Hong Kong's streets are gripped by protesters again

Rows of riot police were far outnumbered by protesters - many of whom wore face masks, helmets or goggles - just hours ahead of a scheduled debate in the city's legislature.

By late morning, with crowds continuing to swell, officials in the Legislative Council (Legco) said they would delay the second reading of the bill "to a later date". 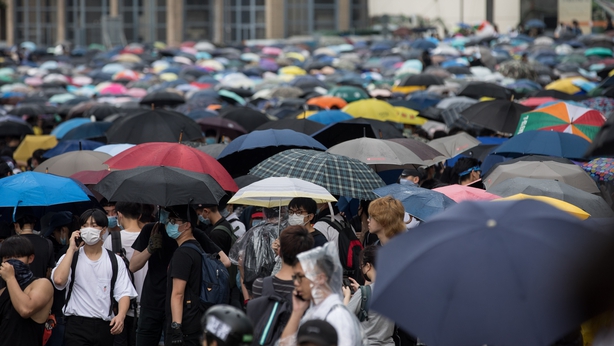 In scenes echoing the Occupy movement in 2014 that shut down swathes of the city for months, people flooded major roads and junctions in the heart of the city, dragging barricades onto highways and tying them together. Some plucked loose bricks from pavements.

Police used water cannon and pepper spray on protesters outside the Legco building and held up signs warning demonstrators they were prepared to use force.

Organisers of a march on Sunday said more than a million people turned out to voice their objections to the proposed law, which would allow Hong Kong to send suspects to other jurisdictions around the world -- including China.

But the record numbers have failed to sway pro-Chinese Chief Executive Carrie Lam, who has rejected calls to withdraw the bill.

Ms Lam has hit out at the protesters, labelling the clashes "organised riots".

"The rioting actions that damage peaceful society, ignoring law and discipline is unacceptable for any civilised societies," Ms Lam said in a video statement, her first comments since the clashes erupted.

"It's obvious that these are not peaceful rallies, but openly organised riots," she added.

Many opponents are fearful the law would entangle people in the mainland's opaque courts, leaving them vulnerable to a justice system seen as acting at the behest of the Chinese Communist Party.

More than 100 Hong Kong businesses said they would close today in a sign of solidarity with the protesters, and the city's major student unions announced they would boycott classes to attend the rallies.

A string of other prominent unions in the transport, social work and teaching sectors either followed suit or encouraged members to attend while a bus drivers' union said it would encourage members to drive deliberately slowly to support protests.

"It’s the government who has forced people to escalate their actions, so I think it's inevitable for the fight this time to get heated," said one 21-year-old protester.

Overnight, a group of around 2,000 protesters held a vigil outside the government offices, with some singing hymns.

Hardline protesters had on Sunday made similar plans to spend the night but were prevented by police, who fought running battles with small groups of demonstrators.

Throughout yesterday evening, police flooded the area around the government offices, stopping and searching many young people as they arrived in the area.

Lawmakers were today forced to postpone a debate on the bill in the city's legislature, which is dominated by Beijing loyalists. A final vote is expected on 20 June.

"The only responsible thing to do now is for Carrie Lam to withdraw the evil bill, or at least to shelve it in order to solve the crisis," said pro-democracy politician Fernando Cheung.

"Because the situation is very tense, if she forces it through and asks the police to use violence, I’m afraid Hong Kong’s children will be hurt, will bleed." 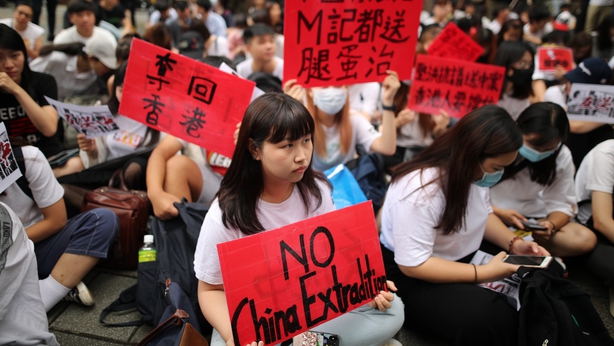 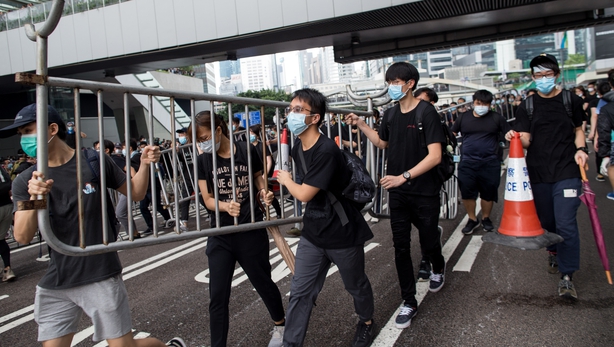 Hong Kong's leaders say it is needed to plug loopholes and to stop the city being a sanctuary for fugitives, and that safeguards are in place to ensure that political critics of Beijing will not be targeted.

But many Hong Kongers have little faith in the government's assurances after years of heightened fears that a resurgent Beijing is trying to quash the city's unique freedoms and culture.

A 50-year agreement between Hong Kong's former colonial ruler, Britain, and China theoretically means the city is guaranteed freedoms of speech and assembly unseen on the Chinese mainland.

The pastor of a usually pro-government mega-church issued a statement saying he could not support the bill while the Catholic diocese urged Ms Lam - a devout Catholic - to delay the bill.

Western governments have also voiced alarm, with the US this week warning the bill would put people at risk of "China's capricious judicial system".