The United States and Mexico have reached a deal to avert a tariff war, with Mexico pledging to take "strong measures" to contain the migration of mostly Central Americans crossing the southern US border.

US President Donald Trump, who has continually railed against illegal immigration as a candidate and since taking office, had threatened to impose 5% import tariffs on all Mexican goods from Monday if Mexico did not do more to tighten its borders.

Imposing tariffs on Mexico would have left the US fighting trade wars with two of its three largest trading partners and would further unnerve financial markets already on edge about a global economic slowdown.

The agreement followed three days of negotiations in Washington.

The US-Mexico joint declaration released in Washington said Mexico had agreed to take more migrants seeking asylum in the United States while they await adjudication of their cases and agreed to increase enforcement to curb illegal immigration, including deploying the National Guard to its southern border. 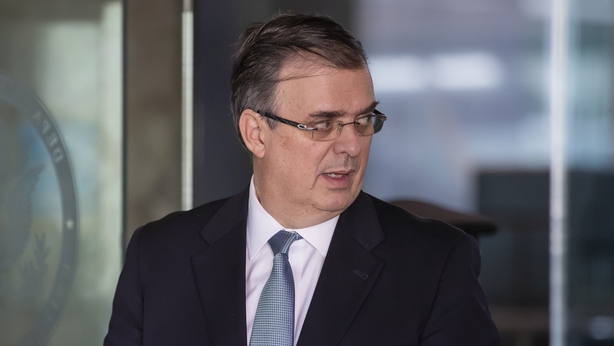 Mexican Foreign Minister Marcelo Ebrard said in Washington that the National Guard deployment would start on Monday. "I think it's a fair balance," he said.

The agreement appeared to fall short of a key US demand that Mexico accept a "safe third country" designation that would have forced it to permanently take in most Central American asylum seekers.

"The tariffs scheduled to be implemented by the US on Monday, against Mexico, are hereby indefinitely suspended," Mr Trump said in a tweet.

I am pleased to inform you that The United States of America has reached a signed agreement with Mexico. The Tariffs scheduled to be implemented by the U.S. on Monday, against Mexico, are hereby indefinitely suspended. Mexico, in turn, has agreed to take strong measures to....

....stem the tide of Migration through Mexico, and to our Southern Border. This is being done to greatly reduce, or eliminate, Illegal Immigration coming from Mexico and into the United States. Details of the agreement will be released shortly by the State Department. Thank you!

The two countries will continue discussions, to be completed in 90 days, on further steps, according to the declaration.

US border officers apprehended more than 132,000 people crossing from Mexico in May, the highest monthly level since 2006.

Mr Trump, who has called the surge in migrants an "invasion", had threatened to impose levies rising to 25% unless Mexico addressed the problem.

Mexico had prepared a list of possible retaliatory tariffs targeting products from agricultural and industrial states regarded as Mr Trump's electoral base, a tactic China has also used with an eye toward the Republican president's 2020 re-election bid.

The US slapped tariffs of up to 25% on $200 billion in Chinese imports last month, prompting Beijing to levy its own tariffs on $60bn in American goods.

Mr Trump said on Thursday he would decide later this month whether to hit Beijing with tariffs on an additional list of $300bn in Chinese goods.

Economists have said that two trade disputes could damage supply lines and pinch consumers at a time when the global economic expansion that followed the 2008 financial crisis has started to sour and the risk of recession has risen.

Even the US, one of the more solid performers on the economic stage, would not be immune to the downdraft.

US business groups were generally opposed to the tariffs, warning they would raise costs for companies and lead to higher prices for American consumers.

Mr Trump's fellow Republicans were also not keen on the prospect of a two-front trade war.