Hundreds of veterans have joined world leaders and royalty to honour those who fought in the D-Day landings 75 years ago at a commemoration ceremony in the UK.

Queen Elizabeth was joined by British Prime Minister Theresa May and US President Donald Trump alongside 300 veterans in Portsmouth to mark the anniversary.

Some 60,000 members of the public are expected to attend the Portsmouth Naval Memorial on Southsea Common for the event which marks the 75th anniversary of the biggest amphibious invasion in military history.

Considered a turning point in World War II, Operation Overlord saw thousands killed and injured after it launched on 6 June 1944.

Mrs May is making her final official appearances as prime minister during the D-Day commemorations which continue tomorrow across Normandy.

Meanwhile, hundreds of veterans are travelling to northern France and Portsmouth as well as to events around the UK to mark the occasion.

Mrs May is hosting 15 world leaders and representatives in Portsmouth today. 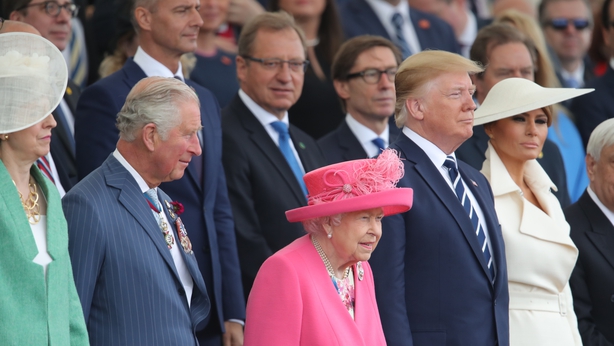 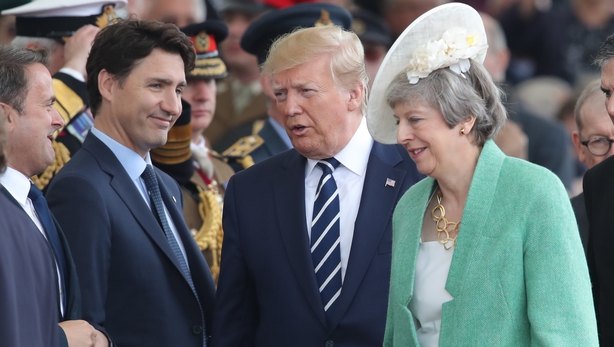 The event is the first time the UK has hosted this many world leaders outside a formal summit since the 2012 Olympics.

A mass security operation was launched in the wake of Mr Trump's attendance at the event - as part of his UK state visit.

Representatives from every country that fought alongside the UK in Operation Overlord - the Battle of Normandy - are attending commemorations as well as the Prince of Wales, members of the armed forces and the veterans who are all over 90 years old.

He read the piece which was originally delivered to the US nation by President Roosevelt on the evening of D-Day 6 June 1944. 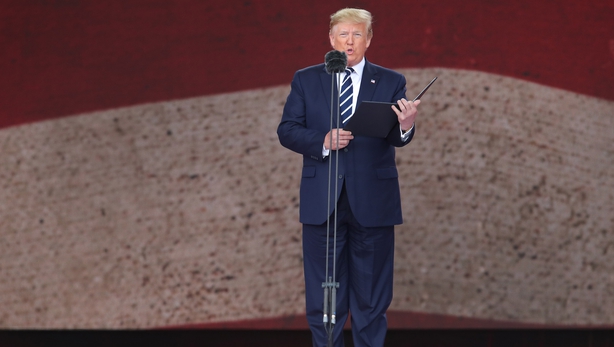 President Trump read: "Almighty God: Our sons, pride of our nation, this day have set upon a mighty endeavour, a struggle to preserve our republic, our religion, and our civilisation, and to set free a suffering humanity."

Canadian Prime Minister Justin Trudeau read the Victoria Cross citation of Lieutenant-Colonel Cecil Merritt, the first Canadian to be awarded the medal for gallantry and inspired leadership during the disastrous raid on Dieppe in 1942.

Mrs May described the landings as a "moment of historic international cooperation" in which veterans fought for liberty and peace.

She called for unity in western Europe, adding: "The global challenges we face today are different in their origin and nature. But as we confront new and evolving threats to our security it is more important than ever that we continue to stand together in upholding our shared values and way of life.

"As I host leaders from around the world today to mark this significant moment in our shared history, we will together reflect on the continued importance of the western alliance for all our countries' security and prosperity."

An hour-long production telling the story of the invasion was played to the crowds featuring testimony from veterans before theatrical performances, live music as well as a flypast of the Red Arrows and Spitfires take place.

As part of the performance Mrs May read a letter written by Captain Norman Skinner of the Royal Army Service Corps to his wife Gladys on 3 June 1944.

The letter was in his pocket when he landed on Sword Beach on 6 June 1944.

He was killed the next day, leaving behind his wife and two young daughters.

Afterwards world leaders will meet to discuss the western alliance and security after a reception with veterans.

From the deck of the aircraft carrier HMS Queen Elizabeth, Mrs May and Defence Secretary Penny Mordaunt will wave off the crowds of veterans who are set to retrace the journey they made across the channel 75 years ago.

This time they will be followed by a flotilla of Royal Navy vessels.

More than 4,000 personnel will be involved in D-Day events in the UK and France.

Later this afternoon veterans Harry Read, 95, and John Hutton, 94, will parachute into Normandy in honour of comrades they lost when they first made the descent 75 years ago.

Alongside around 280 paratroopers they will take part in the jump onto fields at Sannerville - the drop zone for the 8th Midlands Parachute Battalion during D-Day.

This evening, a vigil and silent march will take place at Pegasus Bridge which was the scene of a 15-minute skirmish to take hold of the pathways over the Caen Canal and River Orne.

This was one of the first places British troops liberated on D-Day.