The US-led coalition has said its forces have unintentionally killed more than 1,300 civilians in airstrikes during its fight against the Islamic State group in Iraq and Syria since 2014.

The figure is far lower than the death tolls given by groups which have monitored the conflicts in the two countries.

During this period, it "assesses at least 1,302 civilians have been unintentionally killed by coalition strikes".

The coalition said it was still assessing 111 additional claims of civilian deaths, and was ready to receive new allegations or fresh evidence to review.

The coalition has repeatedly said it does all it can to avoid civilian deaths.

Airwars, an NGO which monitors civilian casualties from air strikes worldwide, estimates more than 7,900 civilians have been killed in coalition raids, well in excess of the total acknowledged by the coalition.

The Syrian Observatory for Human Rights, a Britain-based monitor, says coalition strikes have taken the lives of 3,800 civilians in Syria alone. 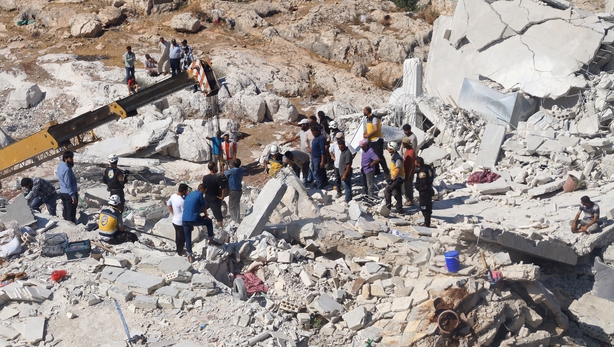 IS jihadists seized large swathes of Iraq and Syria in 2014, declaring a "caliphate" in areas they controlled.

But several offensives with coalition backing chipped away at the "caliphate" until it was declared eliminated on 23 March.

Ambushes and hit-and-run attacks have continued in both countries.

The coalition is continuing to work "to deny Daesh (Islamic State) any physical space and influence in the region as well as deny Daesh the resources they need to resurge", it said.

Currently, there are clashes in Syria’s Idlib province between government forces and rebel groups.

Russia has said it was Turkey's responsibility to stop rebels in the province from firing on civilian and Russian targets, signalling it would continue to back a Syrian government offensive there despite Ankara's protests.

The month-long offensive, the biggest escalation of the war between President Bashar al-Assad and his enemies since last summer, has raised fears of a humanitarian crisis as thousands of people shelter from air strikes at the Turkish border. 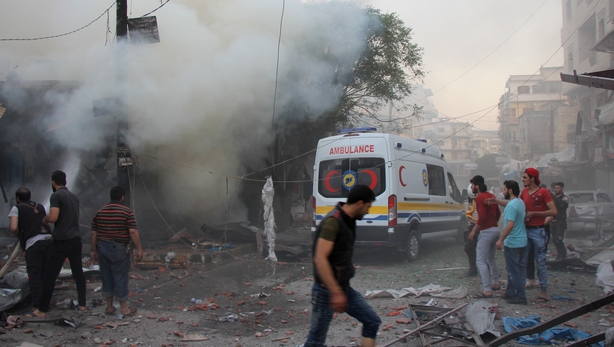 Turkish President Tayyip Erdogan told his Russian counterpart Vladimir Putin that he wanted a ceasefire in Idlib to prevent more civilian deaths and a refugee influx to Turkey.

The Turkish leader has repeatedly complained to Moscow about a Russian-backed Syrian government offensive in the rebel-held northwest, the last significant rebel stronghold.

People displaced by the fighting protested at the Bab al-Hawa border crossing into Turkey, calling for an end to the strikes and for Ankara to open the frontier, something Turkey refuses to do.

The Kremlin made it clear that it was for now unmoved by president Erdogan's calls for a ceasefire, saying the rebels were the ones who had to implement a ceasefire in the first instance.

"We really do need a ceasefire in Idlib and what needs to be achieved is for the terrorists to stop firing on civilian targets and on certain facilities where our troops are located," Kremlin spokesman Dmitry Peskov told reporters when asked about Mr Erdogan's request for a ceasefire.

"...This is the responsibility of the Turkish side."

Russia has complained of rocket and drone attacks against its main Hmeymim air base being launched from Idlib, something Mr Peskov described as "a highly dangerous tendency".

He made no mention of the idea that Syrian government troops, backed by Russian air power, should stop fighting however, and denied Moscow and Ankara disagreed over Idlib. 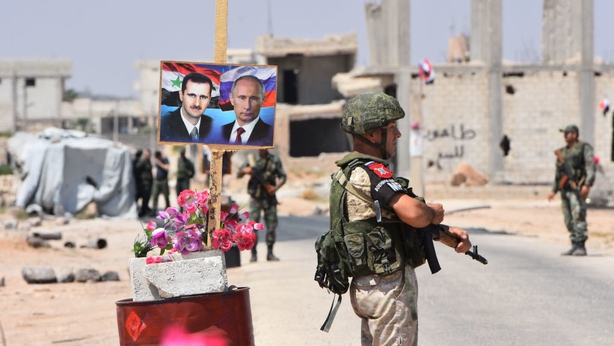 The fate of the province has strained relations between Russia and Turkey, which is keen to retain a degree of influence are given its geographical proximity.

Russia, one of the Syrian government's staunchest allies, and Turkey brokered a deal in September to create a demilitarised zone in Idlib that would be free of all heavy weapons and jihadist fighters.

But Moscow, which is keen to help Assad retake territory, has since complained about escalating violence in the area and said that militants who used to belong to the Nusra Front groups are in control of large tracts of territory.

It has blamed Turkey for not doing enough to hold its side of the bargain, while Ankara, which is worried about refugees crossing from Idlib into Turkey, has repeatedly urged restraint.

The UN said last week that more than 200,000 people had fled the violence since the government offensive began at the end of April.

The Union of Medical Care and Relief Organisations (UOSSM), which provides assistance to health facilities, put the number at more than 300,000.

Many of those who have fled had already been displaced from their homes earlier in the war, sometimes fleeing time after time as the battles moved and frontlines shifted.