Polls have closed in European elections which Theresa May hoped would never have to be held - and which could provide a damaging blow to her Tory party.

UK voters in the European Parliamentary elections cast their ballot almost three years after the Brexit referendum resulted in a decision to leave the EU.

The results will be announced on Sunday, once all 28 EU member states have completed their votes over the next four days.

The UK will elect 73 MEPs across 11 regions, with Northern Ireland electing three MEPs.

The polls opened at 7am and closed at 10pm.

The Conservatives are set to get thumped in what is expected to be Britain's last European elections.

The pro-EU group of Liberal Democrats was second on 19%. The main opposition Labour Party was on 13% while British Prime Minister Theresa May's Conservatives were lagging in fifth place with just 7%.

Leader of the Labour Party Jeremy Corbyn has released a video message warning that "the far-right is on the rise" and  Britain was "at a crossroads".

"The actions we take now will have huge consequences for our future," he said. 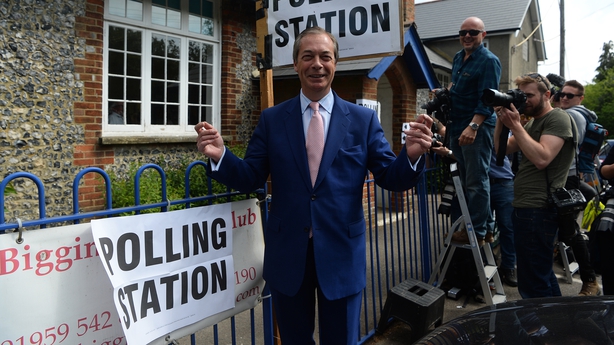 The election comes in the aftermath of Andrea Leadsom resigning from her position as leader of the House of Commons over Mrs May's handling of Brexit.

Ms Leadsom was a prominent campaigner on the Leave side in the Brexit referendum and said she had carefully considered the timing of her resignation.

She decided to step down last night because she could not have fulfilled her duty of announcing a Withdrawal Agreement Bill to the House of Commons, with new elements which she fundamentally opposed.

Mrs May will meet the Chairman of a group of her backbench MPs tomorrow, amid speculation that she will share with him a timeline for her departure from office.