French President Emmanuel Macron has promised significant tax cuts but also a return to public order in France as he revealed his long-awaited response to nearly half a year of street protests.

In the first formal domestic news conference of his entire presidency, Mr Macron steered clear of bombshell announcements but promised the French a more humane style of governance.

He said he wants to scrap the elite university ENA - a factory for top French bureaucrats and presidents including Mr Macron himself - but did not outline a concrete plan for doing so.

Mr Macron, 41, swept to power in 2017 on hopes he would be a youthful breath of fresh air for France.

But over the past half year, the momentum has been knocked out of his presidency by the anti-government "yellow vest" movement which has held weekly protests against social inequality.

"I want cuts for people who work by significantly reducing income taxes," said Mr Macron in his headline announcement at the news conference inside the Elysee Palace.

He said the tax cuts would be worth €5bn and financed by eliminating corporate tax breaks, working longer hours and reductions in public spending.

His announcement came after a vast listening exercise called the Great National Debate launched in response to the protests where high taxes emerged as one of the main gripes.

Mr Macron defended a controversial decision to scrap a wealth tax early in his term but said it would be reviewed in 2020, adding: "It was a reform to stimulate production, not a present for the rich." 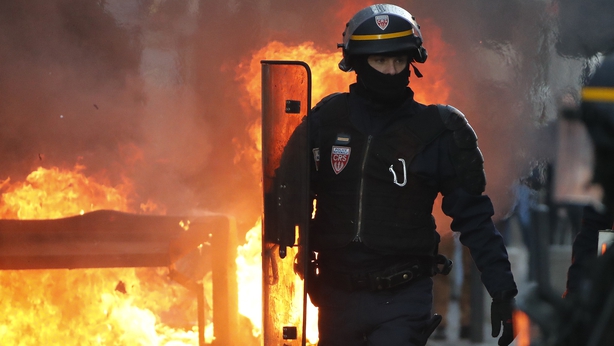 With yellow vest protests still rocking France every Saturday, Mr Macron vowed to press ahead with reforms programme and warned the protest movement - whose demonstrations have often turned violent - that it is time for a return to order.

He recognised that the yellow vest movement had led to many in France feeling "anger and impatience for change" and praised its "just demands".

But he lamented that the movement had "transformed progressively" and been hijacked partly by episodes of anti-Semitic violence, attacks on journalists and homophobia.

He said the hatred seen in some of the demonstrations marked a "regression in civic morality and education and I will fight against it with all my strength." It was their first chance for some time to question a head of state who had previously only spoken to media at press conferences during foreign trips or at home with foreign leaders.

Criticised for often seeming aloof to people's daily concerns - in one episode telling an unemployed man to "cross the road" to find a job – Mr Macron attempted to show a more humble side.

He said the second part of his mandate would be "more humane" and said he regretted giving a sense of "always giving out orders, being hard, sometimes unfair".

He said he wanted to put the "human being at the heart of the agenda" with a "new method" of governance.

On ENA, the post-graduate school that has educated top French politicians and public officials since 1945 and seen as a symbol of French elitism, he said: "We will need to abolish ENA, among others, to be able to build something else."

Opinion polls show his popularity rating stuck on or even under 30%, a far cry from the heady days after his inauguration when his approval rating was over 60%.

Mr Macron already has his eye on the 2022 presidential election, acutely aware that his predecessors Nicolas Sarkozy and Francois Hollande only lasted one term and failed to implement lasting change.

At stake is not just his ambitious agenda to modernise France but his status as a global statesman able to stand up to US President Donald Trump and lead Europe as German Chancellor Angela Merkel steps aside and Britain is bedevilled by Brexit.

He admitted differences with Ms Merkel, including on Brexit where Berlin has taken a tougher line than Paris.

The scheduling of the big speech was also troubled – Mr Macron had been due to make his announcement via a pre-recorded address which was to be broadcast on 15 April.

But just two hours beforehand, Notre-Dame cathedral went up in flames, forcing the presidency to cancel the broadcast as Mr Macron rushed out to the burning Paris landmark.

A day later, the entire text of his reform plan speech was leaked to the media, leaving a major quandary for the Elysee, which was left wondering whether to rehash the old speech or try something new.