Julian Assange faces extradition from the UK to the United States after he was arrested and forcibly removed from the Ecuadorian embassy in London almost seven years after he sought refuge there.

The WikiLeaks founder was brought before Westminster Magistrates' Court this afternoon where he was found guilty of breaching bail conditions in 2012.

He was remanded in custody and will be sentenced at Southwark Crown Court at a later date.

Assange faces up to 12 months in prison on the charge.

He will next appear at Westminster Magistrates' Court on 2 May by video-link in relation to the extradition case.

Assange waved to the public gallery as he was taken down to the cells.

Police detained the 47-year-old after the Ecuadorian government withdrew his asylum, blaming his "repeated violations" of "international conventions and daily-life protocols".

Scotland Yard said in a statement that Assange was held for failing to appear in court in June 2012 and "further arrested on behalf of the United States authorities, at 10.53am after his arrival at a central London police station".

In a statement, the British Home Office said: "We can confirm that Julian Assange was arrested in relation to a provisional extradition request from the United States of America.

"He is accused in the United States of America computer related offences."

In a tweet, Assange's lawyer Jennifer Robinson also said he had been "arrested not just for breach of bail conditions but also in relation to a US extradition request".

The US Justice Department inadvertently revealed the existence of a criminal case against Assange in a court filing last year.

Ms Robinson said he faces a charge of conspiring with former US Army intelligence analyst Chelsea Manning, who leaked a trove of classified material to WikiLeaks in 2010.

Assange was seen shouting and gesticulating as he was carried from the embassy in handcuffs by seven men and put into a waiting Metropolitan Police Service (MPS) van shortly after 10am.

Scotland Yard said: "The MPS had a duty to execute the warrant, on behalf of Westminster Magistrates' Court, and was invited into the embassy by the ambassador, following the Ecuadorian government's withdrawal of asylum."

Ecuador's President Lenin Moreno said on Twitter: "In a sovereign decision Ecuador withdrew the asylum status to Julian Assange after his repeated violations to international conventions and daily-life protocols."

British government ministers welcomed the move with Home Secretary Sajid Javid and Foreign Secretary Jeremy Hunt tweeting that "no-one is above the law".

Mr Hunt said: "Julian Assange is no hero and no one is above the law. He has hidden from the truth for years.

"Thank you Ecuador and President Lenin Moreno for your cooperation with the Foreign Office to ensure Assange faces justice."

His arrest comes a day after Wikileaks accused the Ecuadorean Government of an "extensive spying operation" against Assange.

WikiLeaks, a whistle-blowing website, claimed meetings with lawyers and a doctor inside the embassy over the past year were secretly filmed.

He came to prominence after WikiLeaks began releasing hundreds of thousands classified US diplomatic cables.

But in 2010 an arrest warrant was issued for the Australian for two separate allegations - one of rape and one of molestation - after he visited Sweden for a speaking trip.

Assange launched a legal battle against extradition to Sweden from the UK but when that failed he entered the embassy, requesting political asylum.

He refused to leave, claiming he would be extradited to the US for questioning over the activities of WikiLeaks if he did so.

The Ecuadorian government at the time was sympathetic to his cause but a regime change in 2017 heralded a less supportive approach and after 2,487 days in the embassy building in the shadow of Harrods, he was finally removed.

In May 2017, Sweden's top prosecutor dropped a long-running inquiry into a rape claim against Assange.

The Swedish woman who alleged that she was raped by him welcomed the arrest.

Elisabeth Massi Fritz, who represents the unnamed woman, said the news was "a shock to my client" and something "we have been waiting and hoping for since 2012".

Ms Massi Fritz also said "we are going to do everything" to have the Swedish case reopened "so Assange can be extradited to Sweden and prosecuted for rape."

And she added that "no rape victim should have to wait nine years to see justice be served".

URGENT: Ecuador has illigally terminated Assange political asylum in violation of international law. He was arrested by the British police inside the Ecuadorian embassy minutes ago.https://t.co/6Ukjh2rMKD

BREAKING: UN Special Rapporteur on Human Rights Fionnuala Ní Aoláin tells @todaysor that she is concerned about the human rights issues in the arrest of Julian Assange this morning

Mr Moreno said of Assange: "He particularly violated the norm of not intervening in the internal affairs of other states.

"The most recent incident occurred in January 2019, when WikiLeaks leaked Vatican documents.

"Key members of that organisation visited Assange before and after such illegal acts.

"This and other publications have confirmed the world's suspicion that Assange is still linked to WikiLeaks and therefore involved in interfering in internal affairs of other states.

"The patience of Ecuador has reached its limit on the behaviour of Assange.

"He installed electronic and distortion equipment not allowed.

"He blocked the security cameras of the Ecuadorian Mission in London.

"He has confronted and mistreated guards.

"He had accessed the security files of our embassy without permission.

"He claimed to be isolated and rejected the internet connection offered by the Embassy, and yet he had a mobile phone with which he communicated with the outside world.

"While Ecuador upheld the generous conditions of his asylum, Assange legally challenged in three different instances the legality of the protocol.

"In all cases, the relevant judicial authorities have validated Ecuador's position.

"In line with our strong commitment to human rights and international law, I requested Great Britain to guarantee that Assange would not be extradited to a country where he could face torture or the death penalty.

"The British government has confirmed it in writing, in accordance with its own rules.

"My government has nothing to fear and does not act under threats.

"Ecuador is guided by the principles of law, complies with international law and protects the interests of Ecuadorians." 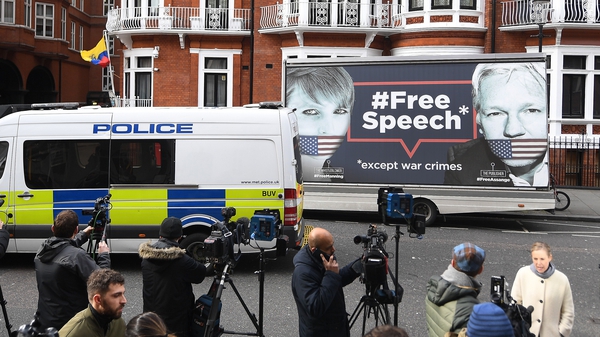