Israeli Prime Minister Benjamin Netanyahu looks set for a fifth term in office after nearly complete election results put him and fellow right-wingers on track to form a governing coalition.

With Netanyahu's Likud and other right-wing parties projected to take around 65 seats in the 120-seat parliament, he is almost certain to be asked by President Reuven Rivlin to form a government.

After Rivlin canvases all parties he is expected to invite Netanyahu to hammer out formal coalition contracts. He will have up to 42 days in which to do it.

In addition to his natural allies, Netanyahu could invite his main challenger - centrist Blue and White - to add its 35 seats to his coalition, although that is seen as a less likely scenario.

Netanyahu faces the prospect of becoming the first sitting prime minister to be indicted.

The attorney general has announced he intends to indict him for bribery, fraud and breach of trust pending a hearing in the coming weeks.

But Netanyahu would be entitled to remain in office until his trial and any subsequent appeal process are over.

With 97% of the vote counted Netanyahu's main rival, ex-military chief Benny Gantz's centrist Blue and White alliance, was projected to win the same number of seats as the Likud.

But the electoral collapse of potential partners left it incapable of putting together more than 55 seats with them - not enough to take power. 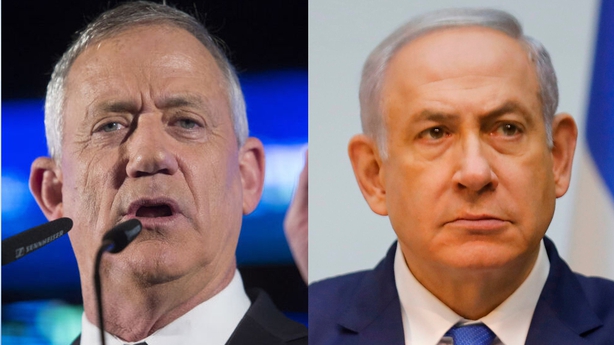 Labour, in particular, crashed in flames with only six seats in the incoming parliament compared to the 24 it held previously in alliance with the centrist Hatnuah party.

Gantz is now set to become leader of the opposition in parliament, an official post.

Final results were expected by tomorrow afternoon, adding in the ballots of soldiers and other special categories of voters.

What is likely to change?

If the preliminary results are largely confirmed, there are unlikely to be any major policy shifts. Netanyahu's outgoing government is already seen as the most right-wing in Israeli history, and the make-up of the next one may be similar.

The strengthening of the two ultra-Orthodox parties - to a combined 16 seats from 13 in the outgoing parliament - will increase their clout in government, particularly in matters of religion and state such as the fierce debate over whether ultra-Orthodox Jews should perform mandatory military service.

What about the Palestinians?

Netanyahu made a last-minute pledge ahead of the elections to annex settlements in the occupied West Bank, a move that could end remaining hopes for a two-state solution if done on a large scale.

There is no sign he would back off from that approach after he forms a government. Israel's politics have moved firmly to the right, with many voters disillusioned by failed peace attempts with the Palestinians.

The landmark Oslo accords of the 1990s were followed by the bloody second Palestinian intifada, or uprising.

"They have chosen an overwhelmingly right-wing, xenophobic and anti-Palestinian parliament to represent them," Ashrawi said in a statement.