Israeli Prime Minister Benjamin Netanyahu cut short a visit to the US and the military said it dispatched reinforcements to the Gaza border after a rocket attack near Tel Aviv wounded seven people.

Mr Netanyahu threatened a forceful response to the long-range strike amid accusations from opponents in a closely contested Israeli election, two weeks away, that he had been showing weakness in the face of security challenges from Gaza militants.

Mr Netanyahu, who arrived in Washington yesterday for a four-day visit, said he would fly home right after his scheduled meeting US President Donald Trump at the White House later today.

"This was a heinous attack on the State of Israel and we will respond strongly," Mr Netanyahu said in a video statement.

"In light of the security events, I have decided to cut short my visit to the United States. In a few hours, I will meet President Trump and immediately after that I will return to Israel to direct our actions close-hand."

The Israeli military said Hamas, the armed group that rules Gaza, fired the rocket that destroyed a house in Mishmeret, a village north of Tel Aviv.

There was no claim of responsibility for the early morning strike.

The military said Hamas launched the rocket from about 120km away, making it the longest-range attack from Gaza causing casualties since a 2014 war. 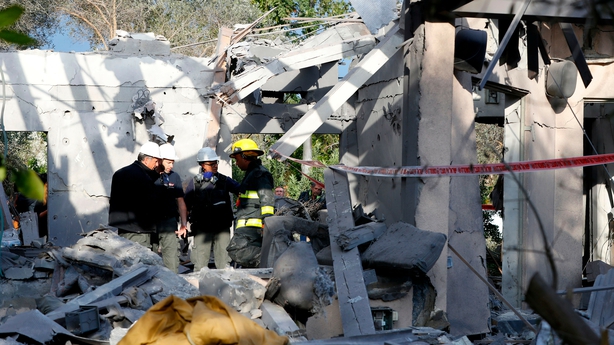 A Palestinian official, familiar with Egypt's efforts to broker a long-term ceasefire between Israel and Hamas, said Egyptian security officials "are working to restore calm – they have been doing so before and after today's rocket".

Israel's Magen David Adom ambulance service said it treated seven people, including an infant, a three-year-old boy, a 12-year-old girl and a 60-year-old woman who was suffering from blast injuries, burns and shrapnel wounds.

The Israeli military is assigning two brigades to the Gaza area and some reservists were being called up. "We are prepared for a wide range of scenarios," chief spokesman Ronen Manelissaid.

Jason Greenblatt, Mr Trump's Middle East envoy, said on Twitter: "We condemn this violence from Gaza and affirm Israel's right to defend itself."

No damage or injuries were caused, but Israel responded to that and further rocket fire by hitting what it said were around 100 Hamas targets across Gaza.

Four Palestinians were reported wounded in those strikes.

Both Hamas and Islamic Jihad denied they were behind the 14 March rocket fire towards Tel Aviv, raising the possibility they were launched by fringe groups.