Venezuela's opposition leader Juan Guaido has announced a nationwide march on Caracas as thousands of people took to the capital's streets to crank up the pressure on beleaguered President Nicolas Maduro.

Brandishing a loudspeaker, Mr Guaido told thousands of supporters he would embark on a tour of the country before leading a nationwide march on the capital.

"Once we've finished the tour, the organization in every state, we'll announce the date when all together we'll come to Caracas," said the 35-year-old leader of the legislature, who is recognised as interim president by more than 50 countries, including Ireland.

Mr Guaido threatened to call on outside intervention "when the time comes," pointing to the constitution, which authorises "the use of a Venezuelan military mission abroad, or foreigners inside the country."

"All the options are on the table," added the National Assembly president, using a phrase employed by US President Donald Trump, who has consistently refused to rule out military intervention in Venezuela.

Mr Guaido was speaking from the back of a pick-up truck after security services prevented the opposition from setting up a stage at their original protest site, arresting three people.

Some 20 armoured anti-riot vehicles were stationed on a highway that leads to the main avenue in the east of Caracas, where the opposition march was due to take place.

"We want to march! Yes we can!" shouted opposition protesters as police prevented them from accessing Victoria Avenue.

Mr Guaido is trying to force out Mr Maduro, whose May re-election he deems illegitimate, in order to set up new polls.

President Maduro also called out his supporters to protest against "imperialism" in a march that marks four years since the United States branded Venezuela a "threat" to its security and imposed sanctions. 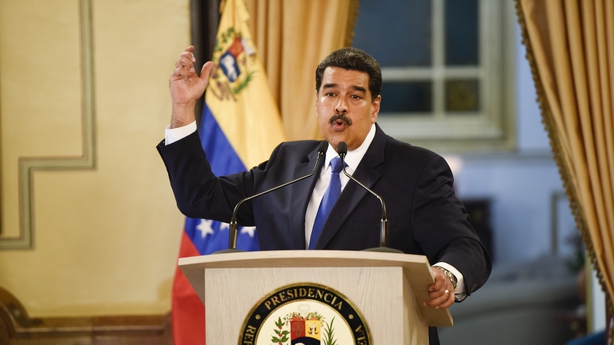 "Today, more than ever, we're anti-imperialists. We will never surrender!" Mr Maduro wrote on Twitter.

The mounting political pressure comes as intermittent services returned to Caracas and the states of Miranda and Vargas, home to the country's international airport and main port, following a major electricity outage that began on Thursday afternoon.

The western regions of Barinas, Tachira and Zulia remained without electricity.

It was one of the worst and longest blackouts in recent memory in Venezuela and paralysed most of the country. Its cause is still unknown.

Hospitals had reported terrible problems and those with generators were using them only in emergencies, while flights were cancelled, leaving hundreds of travellers stranded at airports.

The Caracas subway, which transports two million people a day, remained suspended and shops were closed.

"The problem is food, I'd bought meat and it's going bad. I'm going to the march because we need to change. We're fed up," Luis Alvarez, a truck driver, told AFP.

"There's no water, no light, no food. We can't take it," said Jorge Lugo, a resident from the south-east of Caracas.

Venezuela has suffered more than four years of recession that has seen poverty soar as citizens struggle with food and medicine shortages.

Problems have been exacerbated by hyperinflation the International Monetary Fund says will reach 10 million per cent this year.

An estimated 2.7 million people have left the country since 2015.

"I share the feeling of despair, I have lost relatives due to the lack of medicine," said Mr Guaido, who told supporters that "there's no other option to get out of this without street mobilization."

During the blackout, witnesses described scenes of chaos at several hospitals as people tried to move sick relatives in the dark to clinics with better emergency power facilities.

The opposition said dozens of people died as a result of the power cut, a claim denied by Communications Minister Jorge Rodriguez.

Critics blame the government for failing to invest in maintaining the electrical grid, although authorities often points the finger at external factors when the lights go out.

The state power company Corpoelec said there had been sabotage at the Guri hydroelectric plant in Bolivar state, one of the largest in Latin America. It gave no details.