An 11-year-old rape victim in Argentina was forced to deliver her baby prematurely by caesarean section despite requesting an abortion, sparking an outcry by women’s rights campaigners.

The girl became pregnant after being raped by her grandmother’s 65-year-old boyfriend, according to local media reports.

When she was 19 weeks' pregnant she went to a public hospital in Argentina’s northwestern province of Tucuman to request an abortion, the reports said.

Abortion in Argentina is only allowed when pregnancy is the result of rape, or when the mother’s health is at risk.

But local authorities took nearly five weeks to decide on whether to go ahead with the abortion, while several doctors refused to carry out the procedure, on the grounds of "conscientious objection", local media reported.

The delays meant the pregnancy continued to 23 weeks when doctors decided it was too risky for the girl’s health to go ahead with an abortion.

Instead, doctors performed a caesarean section on Tuesday. The girl gave birth to a severely premature and underweight baby. 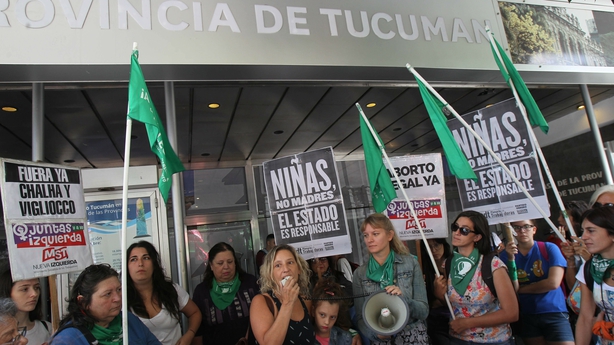 "This is a disgusting abuse of power by provincial health authorities that has profoundly endangered an 11-year-old girl’s life and health and forced her to continue a pregnancy against her wishes," Ms Wurth told Reuters.

Anti-abortion activists said the case showed that both lives should be saved.

The majority Catholic region of Latin America and the Caribbean has some of the most restrictive abortion laws in the world, while a handful of countries, mostly in Central America, ban abortion under any circumstances.

The girl’s case comes six months after Argentina’s senate narrowly rejected a bill to legalise abortion, which would have allowed women and girls to seek an abortion during the first 14 weeks of pregnancy.

Argentina’s National Campaign For The Right to Legal, Safe and Free Abortion said in a statement that "forcing girls to go through a pregnancy and give birth is torture".

According to human rights group Amnesty International, authorities placed "obstacle after obstacle" following the girl’s request to have an abortion.