It is an almost unprecedented situation for two countries that have access to nuclear arms to carry out air strikes on each other's territory.

India and Pakistan are squaring up to each other in what has been described as the most serious military crisis in south Asia in almost 20 years.

Commercial flights in Pakistan and north India have been grounded and both countries are on high alert - with warnings that the conflict could quickly escalate out of control.

But how did it come to this?

India and Pakistan: Bitter rivals for more than 70 years

India and Pakistan have fought three wars since gaining independence from Britain in 1947. Two of them have been over Kashmir.

After partition of the subcontinent in 1947, the scenic area of Kashmir was expected to go to Pakistan, as other Muslim majority regions did.

Its Hindu ruler had wanted to stay independent, but faced with invasion by Muslim tribesmen from Pakistan, hastily acceded to India in October 1947 in return for help against the invaders.

This sparked the first war between India and Pakistan, just two months after they had become independent nations.

In August 1965, India and Pakistan clashed again over Kashmir in a brief but deadly war.

Another conflict in December 1971 saw India lend its support to a bid for independence by East Pakistan. The ending of the war resulted in the creation of Bangladesh.

In 1989, an insurgency by Muslim separatists began. Some have called for Kashmir to join Pakistan, while others want independence.

Currently, there are about 10 million people living in Indian Kashmir and more than 3 million people in Pakistani Kashmir. About 70% of the population is Muslim.

What is the line of control?

The latest crisis began with aerial attacks across the Line of Control - a divide between India and Pakistan.

The UN-monitored ceasefire line was agreed in 1972 and splits Kashmir into two areas - one overseen by India, and the other under Pakistani control. 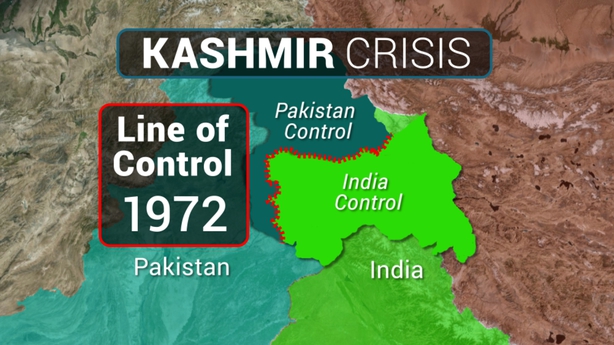 Fighting broke out along this line during the Kargil war of 1999, and intermittent gunfire continued across the line until a truce was agreed in late 2003.

Michael Semple is visiting professor at the Institute for the Study of Conflict Transformation and Social Justice at Queen’s University Belfast.

He has previously visited Balakot - the area in Pakistan's north-western Khyber Pakhtunkhwa province - which is where India targeted its latest strikes.

What caused the latest conflict?

Relations between neighbours India and Pakistan came under more intense strain on the 14th of February this year, when a suicide bombing in Indian Kashmir killed more than 40 troops.

New Delhi had vowed to act, and yesterday its warplanes flew into Pakistani airspace, striking what it said was a camp belonging to Jaish-e-Mohammed (JeM), the militant group that claimed responsibility for the Kashmir bombing.

It was India's first air strike on Pakistani soil since 1971.

Islamabad, while denying the Indian strike caused any major damage or casualties, quickly vowed to retaliate.

Both sides in this long-running conflict have sought to play down the threat of war. But the rare aerial engagement has significantly raised the stakes.

Both India and Pakistan are believed to possess close to 100 nuclear warheads each. Both countries have conducted atomic weapon tests.

Today, EU diplomatic chief Federica Mogherini called on India and Pakistan to show the "utmost restraint" as fears grow over an all-out conflict.

She warned of the dangers of further escalation, stating: "This has the potential to lead to serious and dangerous consequences for the two countries and the wider region.

"We expect both countries to now exercise utmost restraint and avoid any further escalation of the situation," she added, urging the two sides to resume diplomatic contacts to defuse the crisis.

How will Washington respond?

The US has often played a critical role in defusing tensions between India and Pakistan.

In 1999, then US president Bill Clinton used his personal diplomacy to persuade Pakistani leaders not to engage in a full confrontation with Indian troops.

Secretary of State Colin Powell was also instrumental in helping to calm tensions when India's parliament was attacked by Pakistani militants in December 2001, and again in May 2002 when an attack in Kashmir killed 31 people.

"If I were Washington, I'd be in overdrive making phone calls and signalling that it wants tensions to be de-escalated now," said Moeed Yusuf, an expert at the US Institute of Peace in Washington.

"The risks of letting this play out are too great."

US President Donald Trump is today meeting with North Korean leader Kim Jong-un in Vietnam for talks about denuclearisation in North Korea. But another conflict between two nuclear-armed neighbours could quickly escalate into an even more dangerous situation.

'No end to fires in sight' - Irish paramedic in Australia