Construction on the site of a former Jewish ghetto in a Belarusian city has unearthed the remains of hundreds of people in World War II-era mass graves, prompting many locals to oppose a planned residential building.

Exhumations in the southern city of Brest, that began after the chance discovery last month, have to date uncovered the remains of 790 bodies, Dmitry Kaminsky, who is overseeing the operation, said.

Germany took over Brest in June 1941, after war broke out between Nazi Germany and the Soviet Union, and shot thousands of Jews in the city days later.

The ghetto was created in December 1941, following confiscation of all valuable belongings from Jewish residents. The area had a population of at least 18,000 people.

"We are transferring the remains that are dug up to local authorities for reburial," Mr Kaminsky said.

He said the work with the bodies of Jewish victims who lived under the Nazis took an emotional toll. 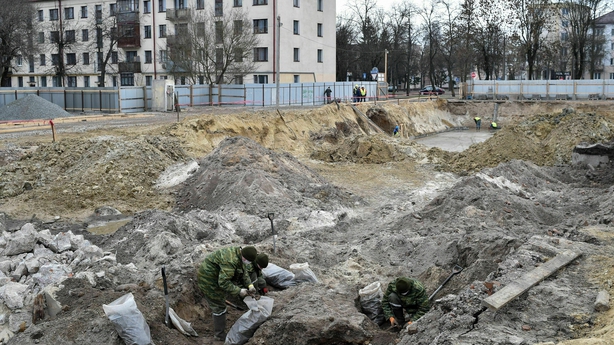 Alla Kondak, an official in the Brest city authority, said victims from the 1941 shootings had been found in several areas of the town before this discovery.

Almost all of Brest's surviving Jews were shot in October 1942 in Bronnaya Gora, a mass killing site for Jews from Belarus and Poland.

Irina Lavrovskaya, an architect and Brest historian, said she had launched a petition aimed at stopping the construction of a residential building on the site of the new discovery.

The site was previously a building that dated back to the times of the ghetto.

Roughly 1,000 signatories want a memorial be erected in the area instead.

"I don't know how you can build a house on bones," said Galina Semenova, 87. "We need to build some kind of memorial in honour of the dead."

The construction company behind the new building, Pribuzhskiy Kvartal, said that work had been approved and would go ahead.

The project was aimed at renovating an area that previously contained "dilapidated and old residential buildings," it said in a statement.

"Unfortunately, in the post-war years in the territory of Belarus... many burial sites were found and are still being found," it said.

"Today, in the form of an open dialogue we are interacting with all those involved in this process... in other regards our company continues to work in accordance with investment agreements."