The Vatican’s doctrinal department will open its own investigation into accusations against Cardinal George Pell, who was found guilty of sexual abuse of minors in his native Australia.

Pell will spend his first night behind bars after he was remanded in custody pending sentencing for sexually abusing two choir boys in Australia two decades ago.

He has proclaimed his innocence and will appeal the verdict.

"After the guilty verdict in the first instance concerning Cardinal Pell, the Congregation for the Doctrine of the Faith will now handle the case following the procedure and within the time established by canonical norm," Vatican spokesman Alessandro Gisotti said.

He did not elaborate.

He also confirmed that Pell, 77, was no longer head of the Secretariat for the Economy.

Pell's five-year term as head of the department, effectively the Vatican's economy ministry, expired several days ago and the pope has not yet named a successor.

Pell, a former top adviser to Pope Francis and the most senior Catholic cleric to be convicted for child sex offences, was found guilty in December of five charges related to the abuse of the two 13-year-old boys while he was Archbishop of Melbourne in the 1990s.

He was back in court today for his sentence plea hearing, where his bail was revoked and he was taken into custody pending formal sentencing on 13 March.

His guilty verdict was revealed in Australia yesterday after reporting restrictions were lifted. 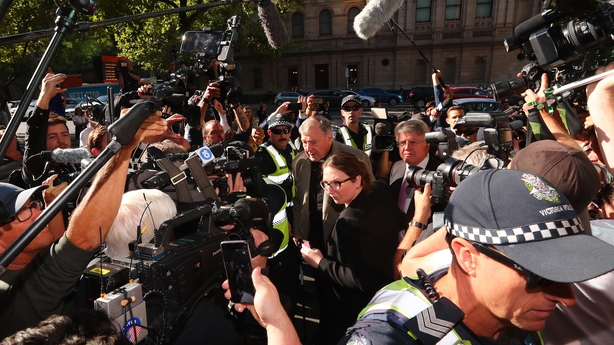 Each of the five offences of which Pell was found guilty carries a maximum ten years imprisonment, and the judge outlined they were serious charges.

"This offending warrants immediate imprisonment," prosecutor Mark Gibson told a packed courtroom, which was crowded with journalists, lawyers and members of the public. "It involved two vulnerable boys."

Two victim impact statements were tendered in the hearing; one from the victim who testified in Pell’s trial and one from the father of the other victim who died in 2014, but they were not made public. 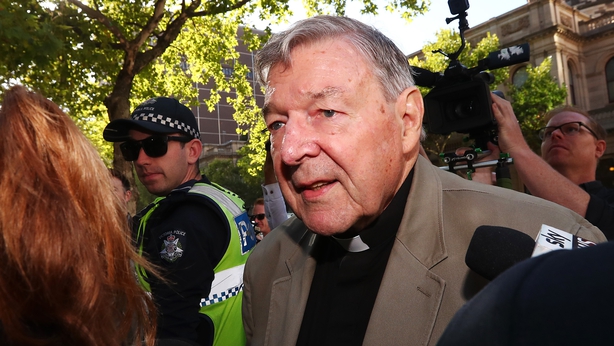 "None of them believe he is capable of this," Robert Richter, a lawyer representing Pell, told the court.

During the trial one victim described how Pell had sexually assaulted him.

"I see this as a serious example of this kind of offending," Judge Kidd told the Melbourne County Court.

"There was an element of brutality to this assault."

Pell was heckled as he arrived at court and sat in the dock flanked by police officers. His conviction dominated Australian media for a second day.

His defence team withdrew an application for a bail hearing at a separate court today, aimed at keeping him free until his appeal was heard.

The conviction of such a senior Vatican official has brought the Catholic church's growing sexual abuse crisis, which has also seen scandals in the United States, Chile and Germany, to the heart of the papal administration.

Mr Gisotti told reporters the conviction was "painful" for many but that the cardinal had proclaimed his innocence and had the right to "defend himself until last level" of judicial process.

The pope ended a conference on sexual abuse on Sunday, calling for an "all out battle" against a crime that should be "erased from the face of the earth".