US Vice President Mike Pence is set to announce "concrete steps" and "clear actions" to address the Venezuela crisis when he meets with regional leaders in Bogota, Colombia, tomorrow, a senior US administration official said.

The official declined to comment on what the new measures would entail ahead of Mr Pence's speech, to be delivered to a summit of the Lima Group tomorrow after he meets with Venezuelan opposition leader Juan Guaido.

The meeting come after convoys of US aid were blocked at the Venezuelan border by forces and gangs loyal to President Nicolas Maduro.

The United States and most other western nations no longer recognise Mr Maduro as the country's leader.

Self-declared interim president Juan Guaido called on the international community to consider "all measures to free" Venezuela after clashes at the border crossing left at least two people dead yesterday.

Mr Guaido announced he would participate in tomorrow’s Lima Group meeting of mostly Latin American countries in Bogota, and called on the international community to be prepared for "all possibilities" regarding Mr Maduro.

US President Donald Trump has said that Washington is not ruling out armed action.

Humanitarian aid, much of it from the United States, has become the centerpiece of the standoff between Mr Maduro and Mr Guaido, the 35-year-old leader of Venezuela's National Assembly who declared himself interim president one month ago.

The country is gripped by a humanitarian crisis that has seen poverty soar during a prolonged recession and hyperinflation.

Mr Maduro claims the aid is a smokescreen for a US invasion, and has ordered several crossings on Venezuela's borders with Colombia and Brazil closed. 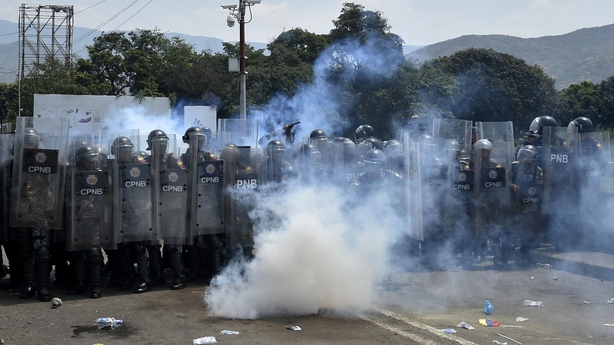 Two people, including a 14-year-old boy, were killed in clashes yesterday with Venezuelan security forces that left more than 300 people wounded at various border posts.

Mr Guaido had set yesterday as a deadline for delivering food and medical aid stockpiled in Colombia and Brazil.

Hundreds of Venezuelans, many dressed in white, were frustrated in their attempts to collect the aid at the Colombian border, where they were pinned back by Mr Maduro's security forces.

Trucks with aid were prevented from entering the country, andforce was used to keep out Venezuelan nationals trying to cross in from Colombia carrying aid parcels.

Colombia ordered aid trucks to return from the border after the violence.

International aid is also being held on the Caribbean island of Curacao.

A ship with aid from Puerto Rico was forced to turn back after receiving a "direct threat of fire" from Venezuela's military, the governor of the US territory Ricardo Rossello said. He slammed the move as "unacceptable and outrageous."

Since dawn, protesters in the border towns of Urena and San Antonio were kept at bay by the Venezuelan National Guard firing tear gas and rubber bullets.

Gunshots could be heard in the streets of Urena during hours of rioting. Civil defence officials in Colombia said at least 285 people had been wounded in clashes at border bridge crossings.

But the most serious incident came at the Santa Elena de Uairen crossing point on the southern border with Brazil where the killings took place.

Another 31 people were wounded when Venezuelan troops opened fire on civilians hoping to collect aid across the border with Colombia, according to rights group Foro Penal. 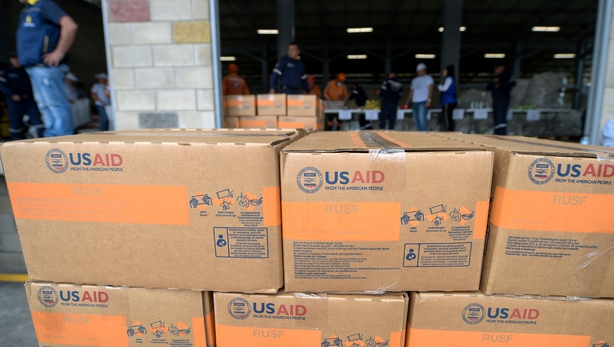 Mr Maduro's supporters also halted and set ablaze two trucks loaded with aid driven through barricades on a border bridge, sending a pall of black smoke into the sky over the Santander crossing linking Cucuta and Urena.

Two other trucks carrying aid sent by Brazil to Venezuela returned to the Brazilian city of Paracaima after Venezuelan troops barred them from crossing for several hours.

Some Venezuelan National Guard troops however took advantage of the confusion to abandon their posts and cross into Colombia.

Colombia's immigration service said at least 60 members of the armed forces had deserted the "Maduro dictatorship" by late last night.

Mr Guaido - recognised as interim leader by more than 50 countries - formally launched a long-planned distribution operation at a warehouse at the Tienditas border bridge in Cucuta joined by the presidents of Chile, Colombia and Paraguay.

"I will never bow down, I will never give in. I will always defend our country with my own life if necessary," Mr Maduro told a rally of his supporters in Caracas, after thousands had marched through the city under the slogan "Hands off Venezuela." 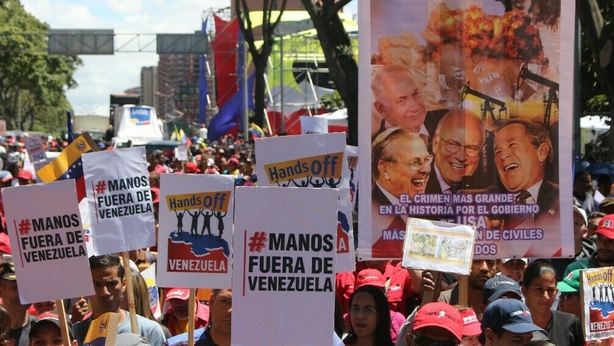 As many as 300,000 Venezuelans are in dire need of food and medicine after years of shortages and malnutrition, according to Mr Guaido, who has accused Mr Maduro of rigging his re-election and is demanding a new vote.

United Nations figures show that 2.7 million people have fled Venezuela since 2015 and around 5,000 Venezuelans emigrate each day.