Thousands of people, many waving Venezuelan flags, flocked to the Venezuela-Colombia border for a charity concert to push for humanitarian aid deliveries in defiance of a blockade by the government of President Nicolas Maduro.

Humanitarian aid has become a key focus of the power struggle between Mr Maduro and opposition leader Juan Guaido, who has been recognised as interim leader by more than 50 countries.

The tense aid standoff turned deadly even before the concert began.

Two people were killed and 15 wounded when they tried to prevent Venezuelan troops from blocking an aid entry point on the Brazilian border.

"An indigenous woman and her husband were killed and at least 15 other members of the Pemon indigenous community were injured," said a local human rights group, Kape Kape.

The clash occurred in southeastern Bolivar state close to the border with Brazil, which Mr Maduro ordered closed yesterday.

Mr Guaido, who yesterday set out from Caracas in a convoy of trucks to personally bring in aid from the border, called on the military to arrest those responsible for the killings, "or you will be responsible".

Some 2.7 million people have fled Venezuela since 2015 amid a devastating political and economic crisis, according to UN figures released today. 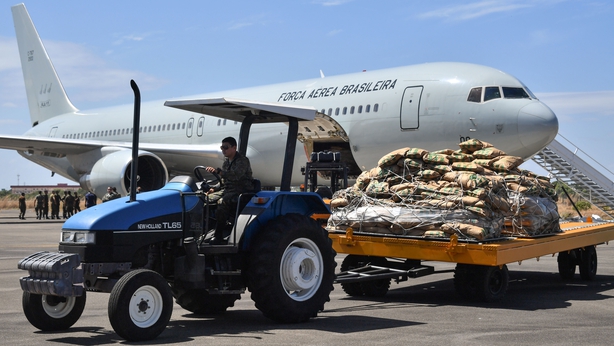 Mr Maduro, who retains the support of allies China and Russia and crucially, the powerful military, has blocked the entry of aid and accused the United States of plotting a military intervention.

"The humanitarian and the social-economic situation in Venezuela is very bad, there's a terrible need for food, for supplies, and the international community is responding," Mr Abrams said.

Russia has blasted the US for using aid as a "convenient pretext for conducting military action".

Hundreds chanted "freedom" and "the government is going to fall" while they waited for the concert to begin under a hot sun on the edge of the Colombian city of Cucuta, the barricaded border crossing visible nearby.

Sir @richardbranson has arrived! He's got a lot to see, which you will see as well from 11 AM on. And many, many journalists from all around the world as well. This is exciting... ¡SO exciting! #AidVenezuela #AyudaVenezuela pic.twitter.com/tUoRxviYAm

Mr Branson said he hopes to raise $100 million for humanitarian aid over the next 60 days via internet donations, though meanwhile aid is being stockpiled in Colombia, Brazil and the Caribbean island of Curacao because of Mr Maduro's ban.

A stage has been built, but there were few people around the site, heavily guarded by military.

Mr Maduro earlier this week announced a three-day "Hands Off Venezuela" concert to last until Sunday but few details of the line-up or schedule have been released.

Yesterday, he warned those taking part in the Cucuta event.

"All the artists that are going to sing in Colombia should know that they are committing a crime, they are endorsing a military intervention."