Students, parents and politicians marked the first anniversary of the Valentine's Day shooting at a Florida high school with sombre tributes, prayers and calls for action.

Marjory Stoneman Douglas High School, where a former student Nikolas Cruz killed 14 students and three staff members a year ago, cancelled classes for the day and offered counselling services instead.

"It's a hard day," said Victoria Gonzalez, 18, standing next to a flower garden surrounded by 17 angels that she helped create to remember those who died.

"I lost my best friend," Ms Gonzalez said of Joaquin Oliver, 18, who was among those killed by a troubled ex-Stoneman Douglas student armed with a semi-automatic weapon.

Thousands of people later gathered in the Pine Trails Park for a brief interfaith service at which the names of the victims were read.

Many people wore red Marjory Stoneman Douglas shirts, while others wore shirts bearing the names of those killed in the shooting. 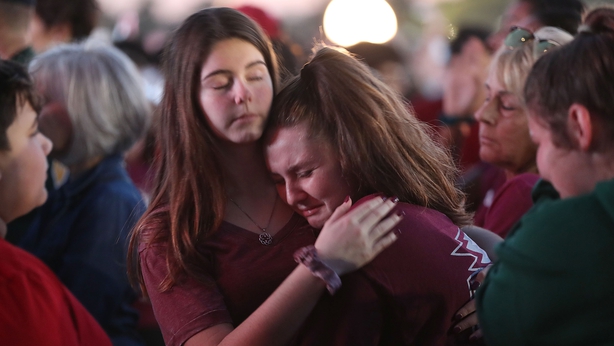 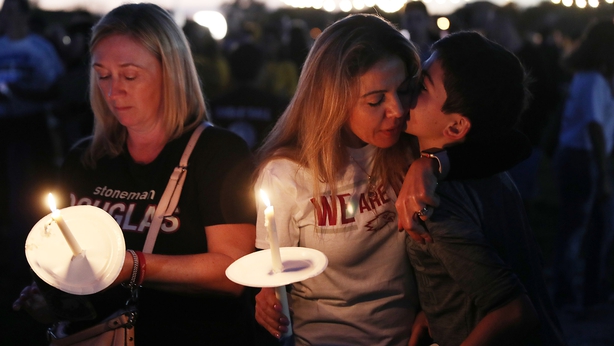 "Seeing all these people come out and care, it means a lot," said Julia Brighton, a 16-year-old survivor who lost both of her best friends and a neighbour in the attack.

Parents of the victims took to Twitter to express their grief.

"Exactly one year ago, to the minute at around 7am, I sent two kids to school," said Fred Guttenberg, whose 14-year-old daughter Jaime was among those killed.

"Only my son Jesse came home," Mr Guttenberg wrote. "I am forever haunted by my memory of that morning, rushing my kids out the door rather than getting one last minute.

Andrew Pollack, whose 18-year-old daughter Meadow was killed, said he lost his "Princess Meadow" a year ago.

"Everyday hurts the same as the first," Mr Pollack said.

"Meadow, my life will never be the same without you, but I've been fighting everyday to make sure this never happens again," he said.

Stoneman Douglas students have become crusaders against gun violence under the banner "March for Our Lives," lobbying for tougher gun control laws and organising protests and rallies.

But Emma Gonzalez, one of the leaders of March for Our Lives, said the movement will go offline and stay silent from Thursday through the weekend.

"Like so many others in our community, I'm going to spend that time giving my attention to friends and family, and remembering those we lost," Ms Gonzalez said.

"The 14th is a hard day to look back on. But looking at the movement we've built -- the movement you created and the things we've already accomplished together -- is incredibly healing," she said.

The school marked the anniversary with a "non-academic" day and closed its doors before 2.20 pm, the moment the shooting started.

"For this date, we wanted to stay quiet, simply out of respect," said 15-year-old shooting survivor Ryan Servaites.

"You know, this affected us very personally," Mr Servaites said. "We love Parkland and we simply don't want to turn this into a day of protest when it really should be a day of mourning."

US President Donald Trump vowed to ensure that US schools are safe, calling it a "top priority" and claiming that "tremendous strides" have already been made.

"Let us declare together, as Americans, that we will not rest until our schools are secure and our communities are safe," Mr Trump said in a statement.

One year ago today, a horrific act of violence took the lives of 14 students and 3 educators in Parkland, Florida. On this somber anniversary, we honor their memory and recommit to ensuring the safety of all Americans, especially our Nation’s children... https://t.co/MDnSX1BFeW pic.twitter.com/EVAeSwA8oV

He specifically cited a ban on bump stocks, which is a modification allowing store-bought semi-automatic weapons to fire similarly to a full automatic weapon.

Mr Trump, whose Republican Party opposes most gun regulation, also said that care for mental health and school security had been much improved since last year.

Much of the momentum for tighter gun laws has come from the grassroots lobbying efforts of the Stoneman Douglas students. 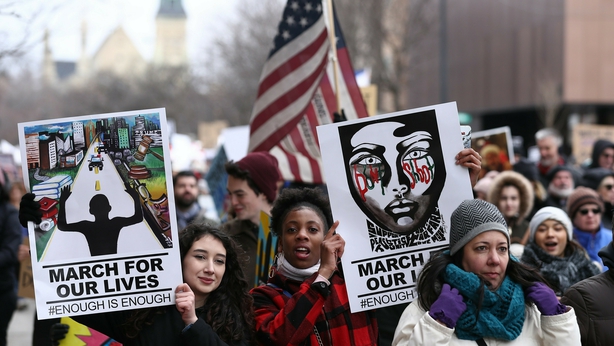 According to the Giffords Law Center, legislators in 26 states and the nation's capital, Washington, passed 67 new gun safety laws in 2018.

Nancy Pelosi, the Democratic speaker of the House of Representatives, pointed to a bill approved in committee that would expand background checks on gun buyers.

"We must continue to turn our pain and heartbreak into action."

While the measure is expected to pass the Democratic-controlled House, it faces an uncertain future in the Republican-held Senate.

In the year since their friends were killed, the students of Parkland refused to settle for the way things are and marched, organized, and pushed for the way things should be - helping pass meaningful new gun violence laws in states across the country. I'm proud of all of them.