Pope Francis has said that the Church must work to overcome the world's "fears and suspicions" of migration, and pledged his support for efforts to avoid further suffering in crisis-torn Venezuela.

The pope is being kept abreast of developments in Caracas, and was praying for the people of Venezuela, Vatican spokesman Alessandro Gisotti said. Francis is supporting "all efforts" to avoid further suffering for the population, he said.

Speaking from Panama in Central America - the hub for US-bound migrants - Pope Francis said migrants were simply seeking "the minimum conditions for a better future".

The Argentine pope was addressing Central American bishops on the first day of his visit for a global gathering of young Catholics for World Youth Day.

Earlier, in a speech to government ministers and members of the diplomatic corps at the foreign ministry, he called on political leaders to reject "all forms of corruption".

Young people, he said, insisted that those in positions of authority should "lead a life that demonstrates that public service is a synonym of honesty and justice, and opposed to all forms of corruption". 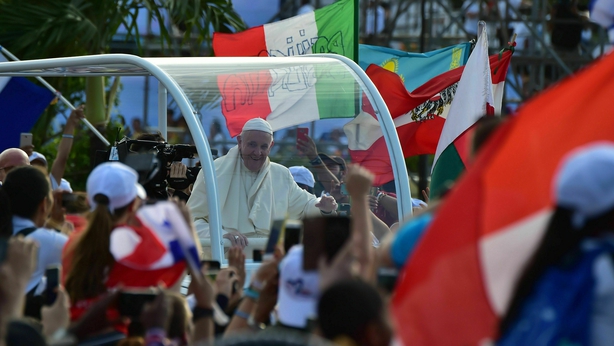 He returned to the theme in his speech to bishops at the nearby 17th Century St Francis of Assisi Church.

Here, he deplored what he called "the plague" of femicide in Latin America, where some 2,800 women are killed each year, according to the Economic Commission for Latin America and the Caribbean (ECLAC).

"The killing of women - our continent is experiencing a plague in this regard," Pope Francis said, saying this and other problems like drug trafficking, gang violence and the sexual exploitation of minors and young people, were "the fruit of a culture and a society run amok."

"Often families have been broken by an economic system that did not prioritise persons and the common good, but made speculation its 'paradise,' without worrying who would end up paying the price."

"And so, we see our young people without a home, without a family, without a community, without a sense of belonging, easy prey for the first charlatan who comes along." 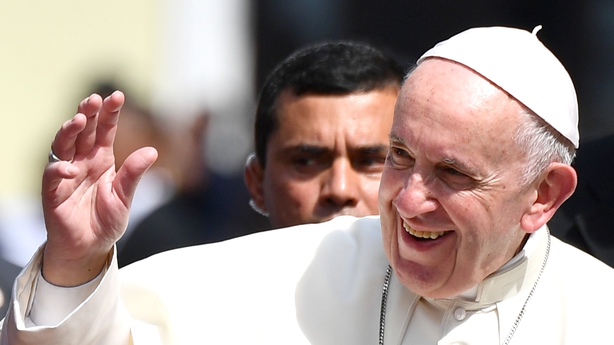 Pope Francis won praise from young people for his comments.

"These crimes are part of a highly macho culture in which we feel diminished," said Fatima Melendez, 18, from El Salvador.

In her country, she said, women need "peace in something as simple as going out into the street."

In the early evening, tens of thousands of young people gave the pope a rock-star welcome to the Catholic jamboree at a palm-fringed park overlooking Panama Bay.

"We want to tell you not to be afraid," the pope said, urging them instead to go forward with "fresh energy and restlessness".

The idea was not to create "a parallel Church that would be more 'fun' or 'cool' thanks to a fancy youth event," he said.

But instead, the "constant freshness and youth" should be used in "service to our brothers and sisters, and concrete service at that".

Several migrant caravans, mostly from Honduras, Guatemala and El Salvador, have been making their way through Central America and Mexico to the US border since last October, amid trenchant opposition from US President Donald Trump.

Pope Francis told bishops that the Church, with hospitality and acceptance, can facilitate "dialogue and help overcome fears and suspicions, and thus consolidate the very bonds that migrations - in the collective imagination - threaten to break".

Thousands turned out to cheer the pope on his way from the Papal Nunciature, where he spent the first night of his five-day visit, to his first official engagement of the day, a courtesy call on President Juan Carlos Varela.

In the narrow streets of the old city, they leaned forward over barriers as the pope's small sedan passed by, waving red and white Panamanian flags.

At the foreign ministry, diplomats posed for selfies with the pope and stretched out to shake his hand as he left the podium after his speech.

At the festive event in the park, dozens of young pilgrims held up a giant yellow, blue and red banner with the legend "Pray for Venezuela". 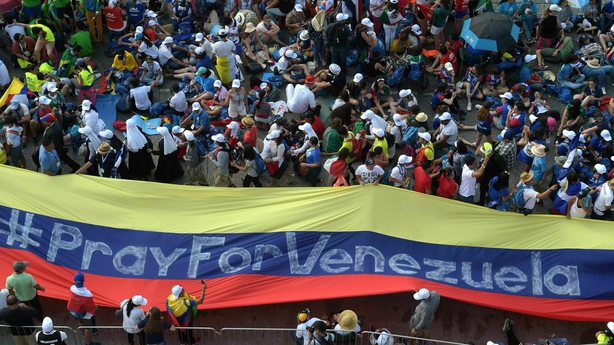 In crisis-wracked Venezuela, opposition lawmaker Juan Guaido has proclaimed himself president with the support of the United States and several other countries - including Panama - setting up a tense standoff with the government of President Nicolas Maduro.

Today, Pope Francis will visit a youth detention centre and hear the confessions of inmates, including one serving time for murder.