The United Nations has said an 18-year-old Saudi woman who fled her family is a legitimate refugee and has asked Australia to resettle her as the Twitter-led campaign to grant her asylum edged towards resolution.

Rahaf Mohammed al-Qunun was stopped by authorities at Bangkok's main airport as she arrived on a flight from Kuwait at the weekend after running away from her family, who she says subjected her to physical and psychological abuse.

Thailand initially said it would deport her at the request of Saudi embassy officials, barring her from travelling on to Australia where Ms Qunun said she had intended to claim asylum.

But armed with a phone, she barricaded herself into an airside hotel room and fought back - live-tweeting her fears of deportation in a campaign that swiftly galvanised international support and prompted a sharp U-turn by Thai officials.

Ms Qunun is now in the care of the UN's refugee agency in Bangkok, which is processing her case.

"The UNHCR has referred Ms Rahaf Mohammed Al-Qunun to Australia for consideration for refugee resettlement," Australia's Department of Home Affairs confirmed in a statement.

The department said it will "consider this referral in the usual way, as it does with all UNHCR referrals".

Australian officials have strongly hinted that Ms Qunun's request will be accepted.

"If she is found to be a refugee, then we will give very, very, very serious consideration to a humanitarian visa," health minister Greg Hunt had said before the UN determination was public. 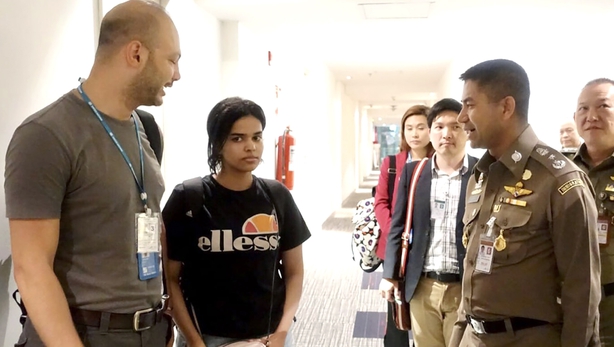 Ms Qunun's desperate tweets ricocheted across social media with the #SaveRahaf hashtag drawing an outpouring of support but also the criticism of some hardliners in her native country.

She only joined the social media site at the start of this month but has quickly racked up more than 100,000 followers.

Phil Robertson of Human Rights Watch said Ms Qunun had renounced Islam, which puts her at "serious risk" of prosecution in Saudi Arabia.

Her father and brother arrived in Bangkok yesterday, but Ms Qunun "refused to see" them, according to Thai immigration police chief Surachate Hakparn, who has been caught up in the international firestorm since Qunun's arrival.

He said the family's patriarch had met with the UNHCR this morning and will return to "her country" later today.

"Her father is relieved that she is safe," Mr Surachate said, adding that the "UNHCR will find a third country that will accept her in two days".

A UNHCR representative told AFP "the process is still ongoing".

On Sunday, Ms Qunun told AFP her family was "abusive" and once locked her in a room for six months just for cutting her hair.

Fleeing them while travelling in Kuwait throws her into conflict of Saudi Arabia's "guardianship" system, which allows male family members to make decisions on behalf of female relatives, she said.

That makes it "100%" certain she will be killed by her family if she is returned to Saudi, she added.

Footage released by Thai immigration shows Abdulilah al-Shouaibi, Saudi embassy charge d'affaires in Bangkok, complaining in a meeting yesterday with Mr Surachate that Ms Qunun's phone should have been confiscated.

"When she arrived, she open a new (Twitter) account and her followers grew to 45,000 in one day," he said in Arabic.

"It would have been better if they had confiscated her mobile instead of her passport."

The Saudi embassy in Bangkok said it "did not demand her deportation" and that the case is "a family affair".

Ms Qunun has returned to posting updates on Twitter, promising to "broadcast continuously to assure" the public of her condition.

"I have prepared my strength and will continue my journey to reach a safe country," she tweeted in Arabic.