Moroccan authorities have made nine new arrests over the brutal murder of two Scandinavian hikers by suspected jihadists in the kingdom's High Atlas Mountains, police said.

The announcement came just hours after police said the bodies of Danish student Louisa Vesterager Jespersen, 24, and Norwegian Maren Ueland, 28, were put on a plane in Casablanca for Copenhagen yesterday.

The new suspects were detained across the country for their "alleged links with the perpetrators of the terrorist act", Morocco's central bureau of judicial investigations said.

Police also seized "electronic equipment, a shotgun, knives... a military uniform and materials that could be used to manufacture explosives", it added.

Moroccan authorities said on Thursday that four other suspects arrested following the murder of the two tourists had pledged allegiance to the Islamic State (IS) group.

The bodies of the two women were found Monday after they had pitched their tent at an isolated mountain site two hours' walk from the tourist village of Imlil.

One of them was beheaded, according to a source close to the investigation.

Imlil is a starting point for trekking and climbing tours of Mount Toubkal, which at 4,167 metres is the highest summit in North Africa.

Hours after the grisly discovery authorities announced the arrest of a first suspect and later said he belonged to an "extremist" group, while the three other suspects were arrested on Thursday. 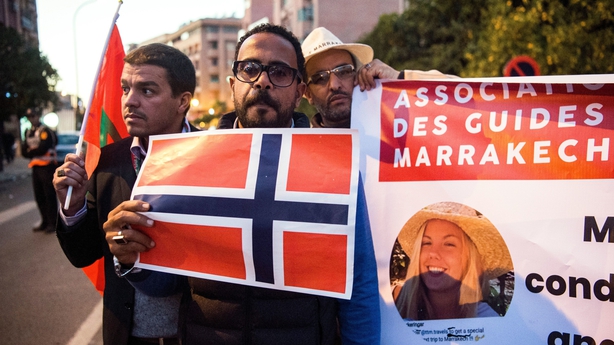 Denmark's PET intelligence service said it "shares" the assessment by the Moroccan authorities that the murders were an "act of terrorism".

Moroccan investigators are probing a link to Islamic extremism after a video emerged showing the suspects "pledging allegiance" to the Islamic State group, the Rabat prosecutor has said.

Authorities were working to determine the authenticity of a video posted on social media networks allegedly showing the murder of one of the tourists, according to the prosecutor.

"At this point, there is no tangible evidence that the video is not authentic," Norway's criminal investigations agency Kripos said Friday.

Denmark's PET agency said "technical analyses have not been completed", but that nothing indicates that the footage is "not genuine".

"The Danish National Police and PET are working closely with the Moroccan authorities," it said.

The first four suspects detained were all arrested in Marrakech, an hour away from the scene of the murder.

Younes Ouaziad, 27, lived with his parents in the working-class Al-Azzouzia neighbourhood.

His family and neighbours said yesterday that they were "in shock".

"He was a boy without any history, private. There was nothing to suggest he could do something like that," 35-year-old Abdelaati, a vegetable seller in the neighbourhood, told AFP.

The murders have prompted condemnation from authorities in Denmark and Norway.

Norway's Prime Minister Erna Solberg condemned what she called a "brutal and meaningless attack on innocents".

Moroccan government spokesman Mustapha Khalfi described the killings as a "terrorist act" while Prime Minister Saad Eddine El Othmani said it was a "stab in the back of Morocco and Moroccans".

Tourism is a cornerstone of Morocco's economy, accounting for 10 percent of national income.

Morocco has been spared jihadist attacks since 2011, when a bomb attack on a cafe in Marrakech's famed Jamaa El Fna Square killed 17 people, most of them European tourists.