Spain's ruling Socialists could lose control of a southern stronghold after a regional election in which a far right party won seats for the first time since the country emerged from fascist dictatorship more than 40 years ago.

Coalition talks have started in Andalusia after no single party won enough votes to rule on its own in the most populous and one of the poorest regions in the country.

The Socialists came first in yesterday’s election with 33 seats out of 109 in the parliament but their failure to win outright in a region they have dominated is likely to fuel calls for Prime Minister Pedro Sanchez to hold a national election ahead of 2020.

Mr Sanchez's minority government has struggled to gain support to pass any meaningful laws since taking control in June.

The far right Vox party capitalised on fears that Spain could be broken up due to a Catalan independence drive and on fears raised by illegal immigration from Africa to win 12 seats, which was more than expected.

Spain has lacked a sizeable far right movement in recent years but the gains by Vox, founded five years ago, could suggest the start of a far-right movement to mirror those elsewhere in Europe. 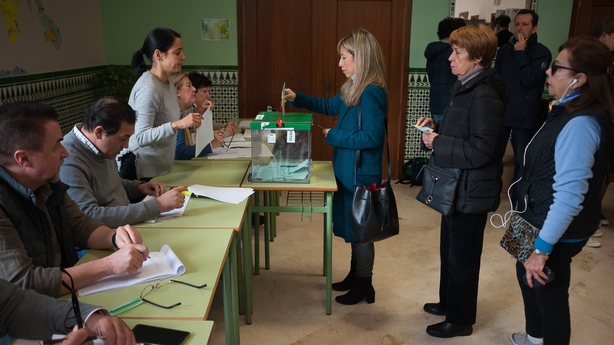 "The ultra-right is here. Spain is no longer an exception," said journalist Luis Barbero in an opinion piece in El Pais newspaper.

This "is perhaps the biggest sign the unease at the handling of the Catalan crisis is greater than thought."

In the wake of the vote, the market-friendly Ciudadanos party, the centre-right People's Party and Vox mulled a potentially uncomfortable alliance, while the Socialists and Podemos ally Adelante Andalusia considered options on the left.

Juan Marin, an Andalusia candidate for Ciudadanos, rejected a coalition with the Socialists and said on national radio he would present himself to lead the region after his party came third with 18% of the vote.

"We won't support a government of (regional Socialist leader) Susana Diaz or with the Socialist party. They've lost the confidence of the Andalusian people and so that possibility doesn't exist," Mr Marin said.

In later comments, the party's general secretary Jose Manuel Villegas called for the PP and Socialists to step aside and allow Ciudadanos to rule.

The PP won 26 seats yesterday while Adelante Andalusia won 17, making a 55-seat majority impossible for any single party without a deal.

Meanwhile, the Socialists dismissed the idea of giving Ciudadanos the leadership and accused it of trying to avoid a politically unsavoury alliance with Vox.

Ms Diaz said that keeping Vox, an anti-immigrant, anti-abortion party, out of power should be the goal of all parties.

"We have the responsibility to prevent the extreme right from getting in to government," she said.

Newly-elected right-leaning PP leader Pablo Casado said he had already reached out to the leaders of Ciudadanos and Vox to test the waters for a possible right-wing coalition.