British broadcaster and environmentalist David Attenborough urged world leaders at the COP24 summit in Poland to get on and tackle "our greatest threat in thousands of years".

Known for countless nature films, Mr Attenborough has gained prominence recently with his 'Blue Planet II' series, which highlighted the devastating effect of pollution on the oceans.

"Leaders of the world, you must lead," said the naturalist, given a 'People's seat' at the two-week UN climate conference in the Polish coal city of Katowice alongside two dozen heads of state and government.

"The continuation of our civilisations and the natural world upon which we depend, is in your hands," he said.

Political leaders are in the Polish coal city of Katowice for the two weeks of talks to revive the landmark Paris 2015 deal on climate change - amid dire warnings about a lack of action.

The world is currently on course to overshoot by far the limits for global warming agreed in the Paris accord, which were intended to prevent more extreme weather, rising sea levels and the loss of plant and animal species.

UN Secretary General Antonio Guterres said at the summit that the world is "way off course" in its plan to prevent catastrophic climate change. 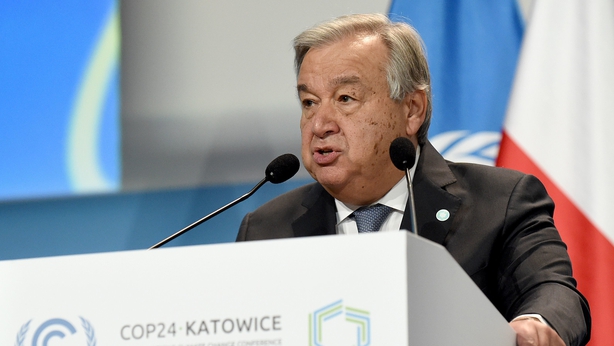 Minister for the Environment Richard Bruton represented Ireland at the opening ceremony.

Speaking from the conference, Mr Bruton said he "completely" agrees with the UN Secretary General's comments.

"The decisions we take now will define the next century. I recently received Government approval to develop an all of Government plan to make Ireland a leader in responding to climate change," said Mr Bruton.

"Mr Guterres' comments underline what we are seeking to do and highlight the urgency of this work."

Representatives of some of the most powerful countries and biggest polluters are conspicuous by their absence, as the United States has said it is leaving the UN process and China was not expected to send any top politicians.

To maximise the chances of success, technical talks began yesterday, a day earlier than planned, with delegates from nearly 200 nations haggling over how to implement the broad promises of the Paris deal on moving away from fossil fuels.

The talks in Katowice have been billed as the most important UN conference since the landmark Paris accord, as they precede an end-of-year deadline to agree a "rule book" on how to enforce action to limit global warming to between 1.5 and 2 degrees Celsius.

Expectations for the Polish talks are low: the atmosphere of political unity built in Paris has been shattered by a wave of populist governments that place national agendas before collective action.

The host nation Poland remains committed to coal, the most polluting of fossil fuels, calling for a "just transition" to allow communities dependent on fossil fuel help in changing their lifestyle.

Riots in Paris at the weekend, partly in protest at higher fuel taxes, also illustrate the conundrum: How do political leaders introduce policies that will do long-term good for the environment without inflicting extra costs on voters that may damage their chances of re-election?

Delegates at the talks said the biggest issues were likely to include finance and the level of scrutiny associated with monitoring individual nations' emissions.

The UN has a goal to raise $100 billion every year from 2020 for climate action. To inject momentum, the World Bank Group today said it would provide a further $200 billion over five years from the start of the next decade.