French President Emmanuel Macron has said that he understood the anger felt by voters outside France's big cities over the squeeze that fuel prices have put on households, but insisted he would not be bounced into changing policy by "thugs".

For over a week, "yellow vest" protesters have blocked roads across France and impeded access to some fuel depots, shopping centres and factories in protest against fuel tax hikes they say have eroded their spending power.

The unrest, including violent skirmishes stirred by fringe groups in Paris over the weekend, has stung Mr Macron as he tries to fight back against a sharp fall in popularity and exposed him to charges of being out of touch with voters. 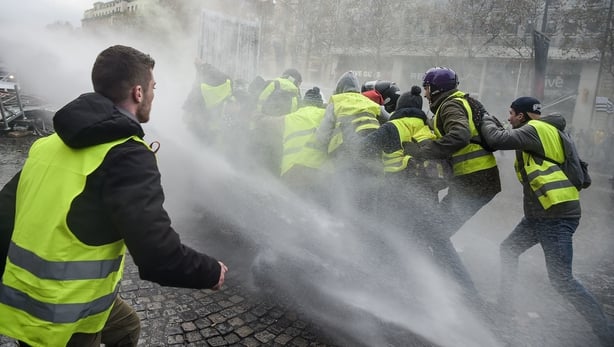 A little over 18 months into his presidency, it has raised questions about whether the 40-year-old former investment banker has misjudged his ability to overhaul France and its economy.

"We must not change course, because the policy direction is right and necessary," Mr Macron said in an hour-long address outlining his blueprint for a transition towards cleaner energy.

Striving to show both humility and empathy with anger among provincial voters, he said his administration needed to be smarter in its policy making to avoid the emergence of a "two-speed France" where workers living outside cities were left behind and grew more frustrated with a perceived urban elite.

The crisis, though, illustrated a "paradox" in a country that cherishes its generous welfare state and was becoming less inclined to pay for it through taxes, he said.

Two people have been killed and more than 600 injured during the 11 days of 'yellow vest' protests across France.

Mr Macron has warned that the violence which turned some Parisian boulevards into battlefields on Saturday risked unnerving foreigners, though he acknowledged today that many protesters held legitimate grievances. 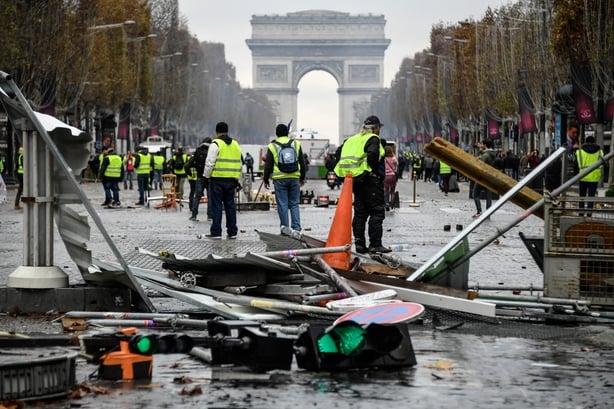 "I will not confuse citizens and their demands with thugs," he said.

"I will not cede any ground to those who want to destroy and create disorder."

But he conceded the increase in diesel tax, which kicked in just as pump prices were rising, had inflicted more pain than anticipated.

He sought to dampen the anger of protesters, dubbed "yellow vests" because of the high-vis jackets they wear at their barricades, with a proposal to review fuel tax rates quarterly to take into account global oil prices.

Protesters manning the roadblocks and the president's political opponents were unimpressed with Mr Macron's overtures, even after the president said his ecology minister would meet representatives of their protest movement later in the day.

"We're all fed up," one protester told BFM TV. "He's not listening to us. Our anger is real."

Conservative lawmaker Damien Abad said the president's remarks underlined the reality gap between the Elysee Palace and the rest of France.

"This was a technocrat's speech, disconnected from the reality of French and not touching on their worries, including those of the 'yellow vests'," he said in a television interview.