Around one million people have filled central Barcelona to celebrate Catalonia's commemorative day and boost a bid for independence which has left deep divisions almost a year after it brought Spain to a constitutional crisis.

The huge turnout, estimated by local police, was a response to a call from Catalan regional president Quim Torra and his predecessor, Carles Puigdemont to show continued support for independence from Spain.

Socialist Prime Minister Pedro Sanchez, who took office in June, has taken a more conciliatory approach than his conservative predecessor Mariano Rajoy but has stood firm against a vote on or move towards independence. 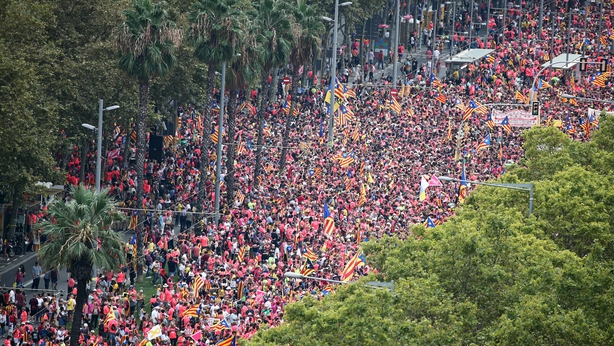 The 11 September "Diada" celebration marks the fall of Barcelona to Spain in 1714, and has been adopted by independence activists in recent years.

It falls just over a year after Mr Puigdemont's administration held a referendum which Madrid sent riot police to try to stop, and made a unilateral declaration of independence.

Mr Rajoy then imposed direct rule, on the basis of Spain's constitution, which states the country is indivisible.

Mr Torra and other attendees at the march wore yellow ribbons representing nine politicians and activists awaiting trial in jail for their role in the independence bid.

Their trials are expected to start later this year, a potential new source of tension. 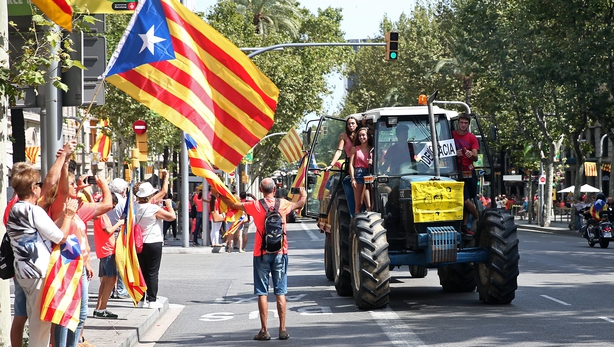 Divisions over the question of secession are stark in a region that makes up around one fifth of Spain's economic output and already has a high level of autonomy in areas including education and health, and its own police force.

A July poll showed 46.7% of Catalans saying they wanted an independent state while 44.9% did not.

A separatist coalition won regional elections in December, although the fervently pro-unionist Ciudadanos emerged as the single largest party.

Ciudadanos's leader, Barcelona-born Albert Rivera, said on Twitter the Diada had been turned into "a day of exclusion, hatred and attack on Spain".

Yellow-hued banners bearing the faces of those in jail and the word 'Free' hung from city lamp posts.