Three, four, five, six… What next?

Turks have over the last half decade counted the rapid depreciation of the Turkish lira on the screens outside doviz (exchange) booths with a mixture of bewilderment, alarm and ironic amusement.

The currency had spent much of 2014 hovering at just over two to the dollar but broke through the three mark for the first time after the 2016 failed coup bid and then slid to four earlier this year.

But the haemorrhaging reached an unprecedented intensity in the last weeks as Turkey's ties with the United States strained further and markets questioned their trust in Turkish policymakers, pushing the currency to five against the dollar. A new bout of selling on Friday on increased strains with the US forced the lira over six against the dollar for the first time, with the currency at one point shredding a quarter of its value in a single day.

Economists say that while the government may be tempted to muddle through the current situation in the hope the external and economic background improves, the lira's fall harbours considerable dangers for the economy, in particular the banking system.

President Recep Tayyip Erdogan's current dash for growth coupled with unorthodox pronouncements on monetary policy - including that lower rates can bring down inflation - have put him on a collision course with markets.

The central bank, nominally independent but never defying Mr Erdogan, appears to have abandoned the conventional monetary policy of using rates hikes as a tool to support the currency and bring down inflation. 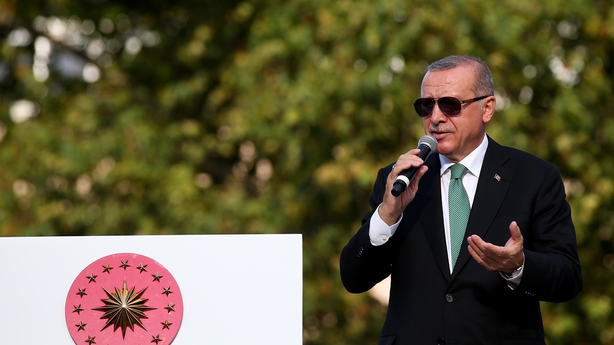 "Erdogan's aim is to improve the economic position of households," she said, adding the government wanted to "keep the music playing" even as external and internal imbalances grow.

After his 24 June election victory, Mr Erdogan put his son-in-law Berat Albayrak in charge of a newly expanded finance ministry, while a new presidential system did away with the office of prime minister, whose last incumbent Binali Yildirim had on occasion urged caution in economic policy.

The new system also increased Mr Erdogan's control over the central bank, which on 24 July baffled markets by leaving rates unchanged despite inflation that in July came in at 15.85%.

"The markets have lost confidence in the triumvirate of President Erdogan, his son-in-law as finance minister and the Turkish Central Bank's ability to act as it needs to," said Charles Robertson, global chief economist at Renaissance Capital. 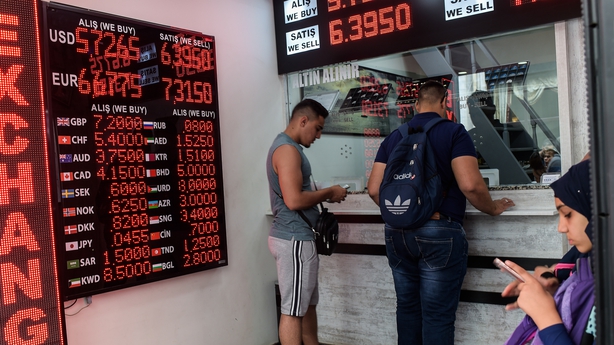 According to the Capital Economics consultancy, the plunge in the lira risks putting further pressure on the banking sector in Turkey due to the scale of the credit boom and one third of bank lending being denominated in foreign currencies.

"If some of these vulnerabilities crystalise they could tip the economy into a full blown crisis," said its economist Yasemin Engin.

US investment bank Goldman Sachs alarmed investors with an assessment that a further drop in the lira to 7.1 to the dollar "could largely erode" the excess capital of Turkish banks.

As the lira tumbled in value - with no breakthrough in sight in the impasse with the US, sparked by the jailing of US pastor Andrew Brunson - the government has remained sanguine with few comments aimed at rallying markets.

The issue has also largely stayed off the front pages of mainstream Turkish newspapers, where critical Turkish economists are given little space, leaving social media as the main forum of debate.

The external value of the lira is not a prime concern of Mr Erdogan's core supporters, many of whom have no plans for foreign holidays and readily accept government rhetoric that economic problems are caused by outsiders seeking to weaken Turkey.

"I have full confidence in this government, I'm sure it will find a way out and reverse the trend," said one of Mr Erdogan's supporters Sabahattin.

Should the woes of the lira risk feeding into a widescale economic crisis, the government still has levers at its disposal.

It could impose capital controls on forex transfers or even call on the IMF for bailout help, although economists regard the former an extreme measure with only marginal probability and the latter unlikely given one of Mr Erdogan's proudest achievements was paying off all of Turkey’s IMF debt in 2013.

But he could also swallow his pride and allow the central bank to make an emergency rate hike as it did on 23 May one month ahead of the elections, when a 300 basis points hike in the headline rate was announced.

"And if the situation continues to deteriorate and the lira depreciation and high inflation have a too big an impact on the economic situation - and that is what it looks like right now - he will in the end give in."