US President Donald Trump has said he looks forward to meeting Kim Jong-un soon and thanked the North Korean leader for sending the suspected remains of US soldiers killed in the 1950-1953 Korean War back to the United States.

"Thank you to Chairman Kim Jong Un for keeping your word and starting the process of sending home the remains of our great and beloved missing fallen! I am not at all surprised that you took this kind action," Mr Trump wrote on Twitter.

"Also, thank you for your nice letter - I look forward to seeing you soon!", he added without elaborating.

The White House has said that Mr Trump received the letter yesterday, and a response would be issued shortly, but that no second meeting between the two men is currently planned.

The US welcomed home the remains it said presumably included Americans killed in the 1950-1953 Korean War last night.

Only one identification "dog tag" was delivered by the North Koreans, underscoring the long path ahead for US military efforts to identify the remains inside the 55 boxes presented by North Korea to the United States last week.

Thank you to Chairman Kim Jong Un for keeping your word & starting the process of sending home the remains of our great and beloved missing fallen! I am not at all surprised that you took this kind action. Also, thank you for your nice letter - l look forward to seeing you soon!

US Vice President Mike Pence hailed the remains' arrival in Hawaii as evidence of the success of President  Trump's landmark summit in June with Mr Kim.

Critics say the summit has so far failed to deliver on promised steps toward denuclearisation by Pyongyang.

"I know that President Trump is grateful that Chairman Kim has kept his word, and we see today this tangible progress in our efforts to achieve peace on the Korean Peninsula," said Mr Pence, whose father fought in the Korean War.

More than 7,700 US troops remain unaccounted for from the Korea War. Around 5,300 were lost in what is now North Korea.

Other countries under the command of the United Nations also lost troops that are still unaccounted for, including the United Kingdom, Australia and Canada.

Mr Pence, in his address at Joint Base Pearl Harbor-Hickam in Hawaii, said he trusted that Americans killed in the war were among the flag-draped cases flown to Hawaii.

"Whosoever emerges from these aircraft, today begins a new season of hope for the families of our missing fallen," he said.

The US military flew the remains from Osan Air Base in South Korea after they had undergone an initial review. 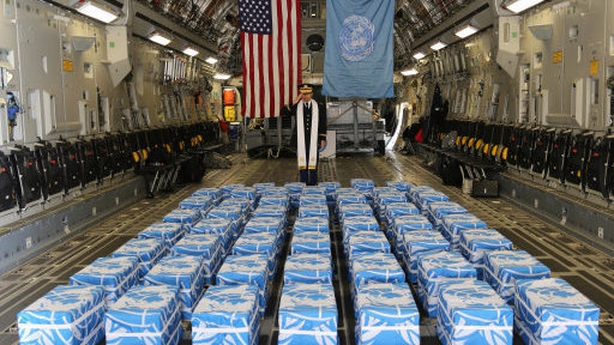 John Byrd, director of analysis for the US Defense POW/MIA Accounting Agency (DPAA), told reporters at Osan that the family of the soldier identified by the dog tag had been notified.

But he cautioned it was unclear if that soldier's remains were among those received from North Korea.

Still, the initial field forensic review indicated the "remains are what North Korea said they were," Mr Byrd said.

The North Koreans provided enough specifics about where each suspected body was found that US officials have matched them to specific battles fought from 1950 to 1951, although not necessarily individuals, he said.

The pledge to transfer war remains was seen as a good will gesture by Mr Kim at the Singapore summit, and was the most concrete agreement reached by the two sides so far.

While it has taken longer than some had hoped, a US State Department official said the process had so far proceeded as expected, and the handover rekindled hopes for progress in other talks with North Korea aimed at getting it to abandon its nuclear weapons programme.

But questions have deepened over Pyongyang's commitment after US spy satellite material detected renewed activity at the North Korean factory that produced the country's first intercontinental ballistic missiles capable of reaching the United States.

US Secretary of State Mike Pompeo told the US Senate Foreign Relations Committee last week that North Korea was continuing to produce fuel for nuclear bombs despite its pledge to denuclearise.

Air Force General John Hyten, who as commander of the US Strategic Command oversees the US's nuclear forces, said North Korea had clearly demonstrated its commitment to halt flight-testing missiles since none had launched since November.

But he declined to comment on intelligence about any other North Korean research activities.

"I won't say anything about what they're doing on the ground because that would cause me to reveal intelligence sources," Gen Hyten told reporters in a briefing.

The transfer of the remains on the Korean Peninsula coincided with the 65th anniversary of the 1953 armistice that ended fighting between North Korean and Chinese forces and South Korean and US-led forces under the UN command.

The two sides remain technically at war because a peace treaty was never signed.

The United States and North Korea conducted joint searches from 1996 until 2005, when Washington halted the operations, citing concerns about the safety of its personnel as Pyongyang stepped up its nuclear programme.

More than 400 caskets of remains found in North Korea were returned to the United States between the 1990s and 2005, with the bodies of some 330 other Americans also accounted for, according to the DPAA.

The Pentagon said last week it was considering the possibility of sending personnel to North Korea to search for additional remains.