Congo has begun to administer an experimental Ebola vaccine to medical staff in the northwestern city of Mbandaka to tackle an outbreak of the virus, which is believed to have killed 26 people since early April.

The World Health Organisation (WHO) hailed the vaccinations as a "paradigm shift" in how to fight the disease which killed more than 11,300 people in a West African epidemic between 2013 and 2016.

The WHO is sending over 7,540 doses of the vaccine to the central African country, 540 of which have been earmarked for Mbandaka, a city of about 1.5 million where four Ebola cases have been confirmed.

In a ceremony attended by health minister Oly Ilunga Kalenga, health workers in blue overalls and rubber gloves administered the vaccine developed by US drug company Merck, marking the start of a complex effort to ring-fence the virus before it gets out of control.

The other vaccines will be given to medical staff later at a nearby hospital.

People who had contact with Ebola victims will come later.

"This is a new phase in our response, another pillar in the fight. We must continue the monitoring of contacts," Ilunga said.

Ebola causes hemorrhagic fever, vomiting and diarrhoea and spreads through contact with the bodily fluids of an infected person. 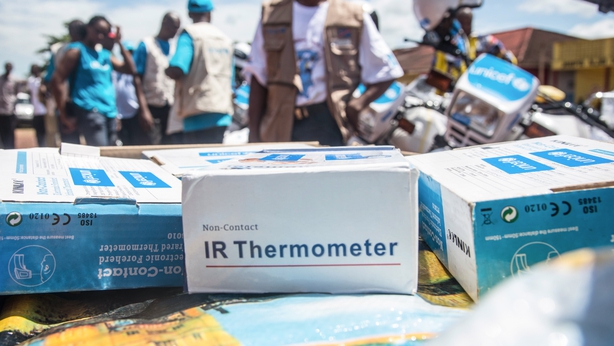 When a new case is diagnosed, all people who might have been in recent contact with the patient are traced and vaccinated to keep the disease from spreading.

WHO Director General Tedros Adhanom said the outlook for dealing with the new outbreak - the ninth in Congo since the disease made its first known appearance in the 1970s – was brighter than when the West African epidemic was reported.

Mbandaka lies on the Congo River with regular transport links to the Kinshasa, raising concerns that the virus could spread to the capital where 10 million people live.

The need to keep the vaccine at 80 degrees Celsius below freezing in a humid region with erratic electricity supply has further complicated the operation.

"It's concerning that we now have cases of Ebola in an urban centre, but we are much better placed to deal with this outbreak than we were in 2014," Mr Adhanom told health ministers at the start of the WHO's annual assembly in Geneva.

The WHO's head of emergency response Peter Salama said use of the VSV-EBOV shot means regions with Ebola outbreaks can in future expect more than just containment with basic public health measures such as isolation and hygiene.

"It's the first time in the midst of an outbreak ... that we're using this as a way to stem transmission," Mr Salama said.

"It's an important moment that changes the way we've seen Ebola for 40 years."

Of the 46 people thought to have been infected so far in the latest outbreak, 26 have died, the WHO said.

Of that caseload, 21 have been confirmed in a laboratory, 21 are regarded as probable Ebola cases, and four patients are suspected of having Ebola.

The WHO's previous leadership was heavily criticised for its slow response to the outbreak that began in late 2013.

The WHO did not call an emergency meeting for that outbreak until August 2014.