Ten people have been killed and 15 others injured after a van struck pedestrians in Toronto, police said.

The incident occurred just before 1.30pm local time (6.30pm Irish time) when a van drove onto a footpath and hit multiple people.

It happened as large crowds of office workers were on lunch breaks.

The driver was in custody, police said.  He has been named as 25-year-old Alek Minassian from north Toronto.

"This is going to be a complex investigation," deputy police chief Peter Yuen told reporters.

"We have one person in custody and the investigation is ongoing."

At least one Reuters witness described the driver as appearing to deliberately target victims.

Canada's public safety minister, Ralph Goodale, declined to comment on what may have motivated the attack.

"The investigation is at a stage where no further information can be confirmed at this point," Mr Goodale told a news conference said.

"The police are conducting obviously their thorough investigation to determine what happened and why it happened, the motivations involved."

Buildings and workplaces in the area were locked down, and a nearby subway station was closed and service suspended after police were alerted of the incident. 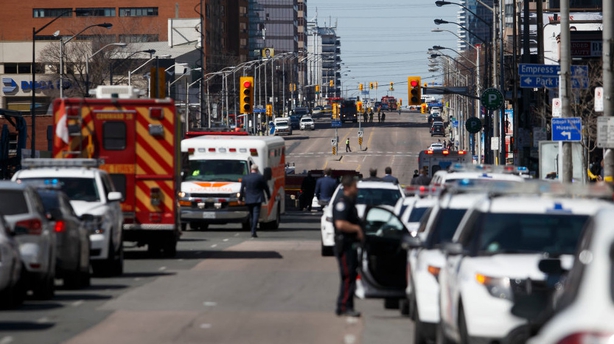 The incident happened about 30km from downtown, where the Group of Seven foreign ministers of industrialised nations, including Canada, the United States, Britain, France, Germany, Italy, and Japan are meeting.

Our thoughts are with all those affected by the terrible incident at Yonge and Finch in Toronto. Thank you to the first responders working at the scene – we're monitoring the situation closely.

The United States and Europe have seen a string of deadly attacks in which vehicles were used to mow down pedestrians, including a 31 October attack in New York that killed eight.