Protesters gathered outside the Liverpool hospital where terminally ill boy Alfie Evans is being cared for, as his father insisted he has the right to take him home.

The demonstration came a day after a High Court judge expressed his sympathy for the parents of the 23-month-old who is approaching death after being at the centre of a life-support treatment battle.

Mr Justice Hayden described what had happened to Alfie, who has a rare degenerative neurological condition, as "profoundly unfair" as he endorsed an end-of-life care plan drawn up by specialists.

Merseyside Police said last night that they were at the protest outside Alder Hey Children's Hospital and said access to the hospital was being disrupted.

Footage posted online showed what appeared to be Alfie's parents, Tom Evans and Kate James, receiving huge applause as they joined the significant crowd of protesters who were chanting Alfie's name, while a banner emblazoned with "Alfie's Army" could also be seen in footage. 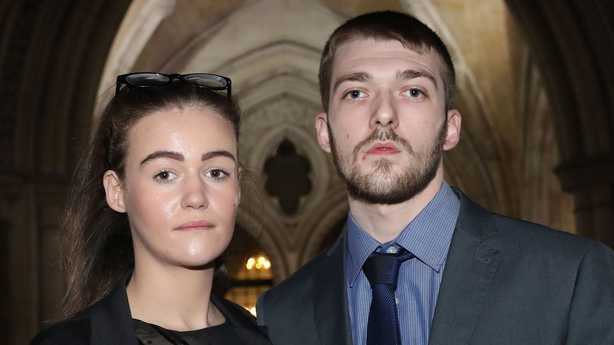 A video posted on Facebook showed Alfie's father filming his son in the hospital and holding a letter which he said states he has the right to leave with his child.

The words "Christian Legal Centre" can be seen at the top of the letter.

Mr Evans said the documentation says he is allowed to leave legally, and that he has removed the duty of care and given it to their air ambulance company.

"Alder Hey have phoned the police to stop me from taking my son out of the hospital. This is my son. Look at my healthy, healthy young boy who is undiagnosed, who is certainly not dying," he said.

During the nearly two-and-a-half minute clip he also encouraged people to come to the hospital to stand outside and "tell them to release our son" in a "quiet protest."

He added: "They have phoned the police over a child ... Look how innocent the boy is, look at him, he lies there eagerly waiting for his trip home. "How can this come to this?"

We can confirm that officers are at @AlderHey to monitor a peaceful protest tonight, Thursday 12 April. Please note that access to the hospital is currently being disrupted and protestors are asked to be respectful of other patients and visitors trying to access the location. pic.twitter.com/BWxSsbqIJF

Alfie's parents, who are both in their 20s and from Liverpool, have lost treatment fights in the High Court, Court of Appeal, Supreme Court and European Court of Human Rights.

In February, Mr Justice Hayden ruled that doctors at Alder Hey Children's Hospital could stop treating Alfie against the wishes of his parents following hearings in the Family Division of the High Court in London and Liverpool.

On Wednesday, during a follow-up hearing in London, he endorsed a plan put forward by Alder Hey doctors for withdrawing life support treatment.

The judge said detail of that plan could not be revealed because Alfie was entitled to privacy at the end of his life.

Assistant Chief Constable Serena Kennedy: "Although peaceful, the large protest that took place tonight did cause significant traffic disruption and inconvenience for other people trying to access the hospital.

"I want to remind people to please consider other hospital users, as these delays could have caused serious problems for staff and patients alike.

"We fully understand what a sensitive and emotional time this is for everyone involved and I would also therefore like to pass on our appreciation for the way in which Alfie's family were later able to speak to the crowd and offer assurance and calm."