The winning photo showed a masked Venezuelan protester on fire, taken during violent protests in Caracas.

Mr Schemidt was covering the demonstrations for AFP when the then 28-year-old Victor Salazar caught fire as he and other protestors were trying to destroy a police motorbike and the gas tank exploded in his face on 3 May 2017. 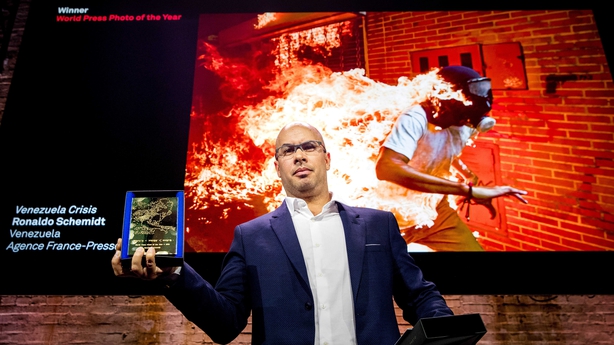 The searing image shows Salazar, who is wearing a mask, running as a cloak of fire envelopes his body. He survived the incident with first and second-degree burns, the competition's organisers said.

"The photo of the year has to tell an event ... it also has to bring questions ... it has to engage and has to show a point of view on what happened in the world this year," said Magdalena Herrera, Geo France's director of photography, and chair of the jury.

"This is a classical photo, but it has an instantaneous energy and dynamic."

It has "colours, movement and it's very well composed. It has strength. I got an instantaneous emotion," she said.

There was joy for Sportsfile photographer Stephen McCarthy who picked up second prize in the Sports category for his image from a New Zealand Maori and Lions match in Rotorua last year.