The right-wing nationalist prime minister projected himself as a saviour of Hungary's Christian culture against Muslim migration into Europe - an image that resonated with millions of voters, especially in rural areas.

The election produced a turnout of around 70%, exceeding the past three elections.

According to preliminary results with 85% of votes counted, National Election Office data projected Fidesz to win 133 seats, a two-thirds majority in the 199-seat parliament.

Nationalist Jobbik was projected to win 26 seats, while the Socialists were projected as third with 20 seats.

The victory could embolden Mr Orban to put more muscle into a Central European alliance against the European Union's migration policies.

Mr Orban, Hungary's longest-serving post-communist leader, opposes deeper integration of the EU and - teaming up with Poland - has been a fierce critique of Brussels' policies.

With his firm grip on state media and his business allies in control of regional newspapers, Mr Orban's message was amplified in the countryside.

Many people there only watch the state television news channel, which has shown immigrants causing trouble in western European cities night after night. 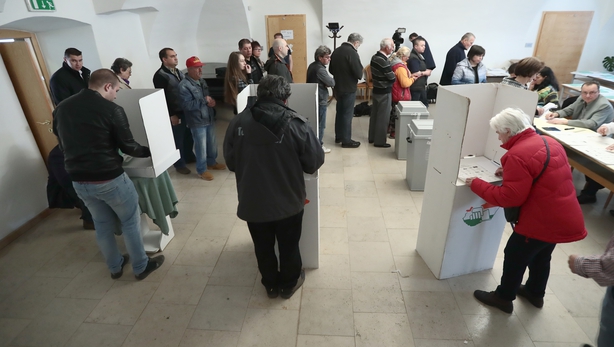 Mr Orban has far-right admirers across Europe who like his tough line on migrants and his smooth victory shows that his single-issue campaign, arguing that migration poses a security threat, had paid off.

Critics say Mr Orban has put Hungary on an increasingly authoritarian path and his stance on immigration has fuelled xenophobia.