A survivor of the Florida school shooting nicknamed 'Iron Man' for his efforts to save classmates said he did not want to be labeled a "hero," as his family announced a lawsuit against authorities.

Anthony Borges, 15, was shot in both legs and the back by Nikolas Cruz, who opened fire at Marjory Stoneman Douglas High School in Parkland on 14 February.

Despite his injuries, the teenager managed to shut a door, preventing the shooter from entering the room where around 20 students were hiding. In doing so, he was shot twice more.

"I don't know why I survived, but I will tell you that my family and I will dedicate the rest of our lives to seeing that something like this never happens again," Anthony said in a statement via his lawyer, Alex Arreaza.

He entered in a wheelchair, and still recovering after nine surgeries and seven weeks in hospital, did not want to speak.

"I'm just a kid who wants to go back to school without being afraid." 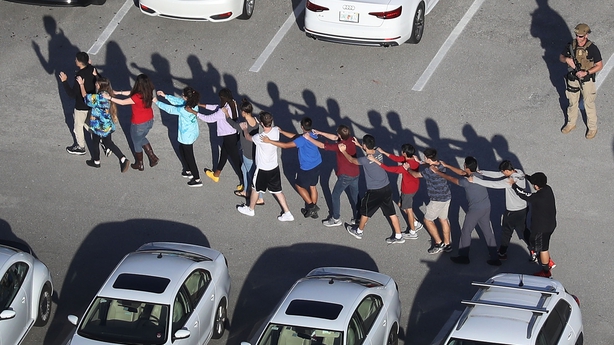 The teenager also accused Broward County Sheriff Scott Israel and schools superintendent Robert Runcie of failing him, as they were unable to prevent Cruz from buying firearms and entering the school despite his erratic behavior.

"You know he was a problem and you did nothing," he said.

Mr Arreaza, who had already announced the lawsuit against Mr Israel and Mr Runcie, said he would file "today or tomorrow" against them, Nikolas Cruz and the executors of Cruz's mother's estate.

"They damaged my son's soccer career," Royer Borges said, alleging it took 38 minutes for authorities to get to his son after he was shot.

The Borges family left Venezuela more than 15 years ago over political instability and fears over rampant crime.

"While we appreciate the efforts in Washington DC, Venezuela is a place where they have gorgeous marches with millions of people and nothing gets done," Mr Arreaza said, referencing the March For Our Lives in March.

"(The family has) decided that they're going to put their faith in American justice system."