President Vladimir Putin flew to the scene of a deadly shopping centre fire in Siberia that killed 64 people and promised angry residents that those responsible for what he called criminal negligence would be harshly punished.

He declared tomorrow as a day of mourning for the victims.

The fire, at the Winter Cherry centre in the city of Kemerovo, killed 41 children, according to the Interfax news agency, and the calamitous way it was handled has stirred anger and focused attention on corruption and lax fire safety standards.

Re-elected only this month, Mr Putin laid flowers at a makeshift memorial to the victims in the coal-producing region about 3,600km east of Moscow, before chairing a meeting of top officials.

"What's happening here? This isn't war, it's not an unexpected methane explosion at a coal mine. People came to relax, children. We're talking about demography and losing so many people," Mr Putin, visibly angry, told the meeting.

"Why? Because of some criminal negligence, because of slovenliness. How could this ever happen?," he added.

"The first emotion when hearing about the number of dead and dead children is not to cry but to wail. And when you listen to what has been said here, speaking honestly, other emotions arise."

Investigators said fire exits had been illegally blocked, the public address system had not been switched on, the fire alarm system was broken, and children had been locked inside cinemas.

Many staff responsible for public safety fled when the fire broke out, investigators said. 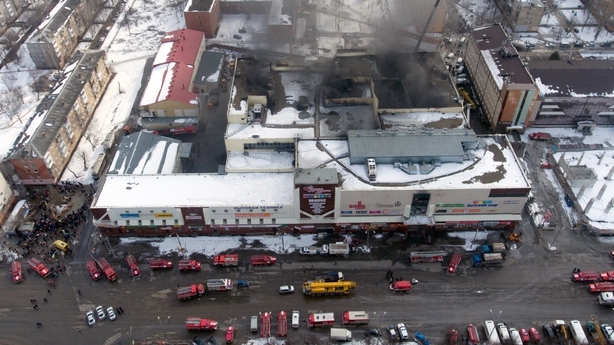 The fire swept through the upper floors of the shopping centre, where a cinema complex and children's play area were located, on Sunday afternoon.

Hundreds of angry protesters, many of them crying, gathered in central Kemerovo today.

The mayor, Ilya Seredyuk, tried to speak, but his words were often drowned out by chants calling on him to resign. 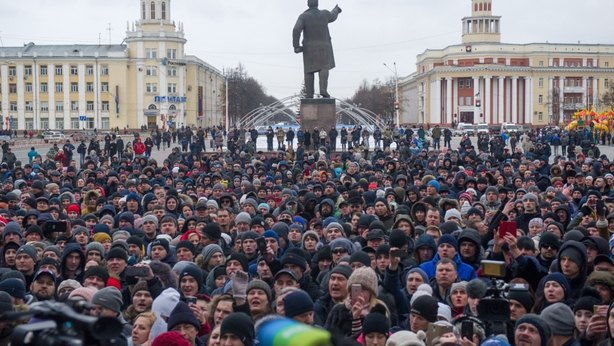 Many locals do not believe the official death toll of 64 and suspect that hundreds of people were killed in the blaze and that a cover-up is under way, something Mr Putin has flatly denied.

Relatives of the victims say they have compiled a list of 85 people, most of them children, who are still missing.

Natalia and Sergei Agarkov, whose two children were killed in the tragedy along with their grandmother stood on the square holding photographs of their dead loved ones.

"Masha ... was really good at sport. She should have ran out, but everything was locked. I identified them yesterday. I didn't see Kostya, but recognised him by his little boots." 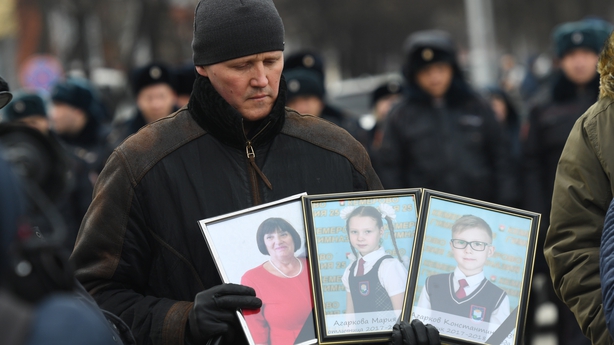 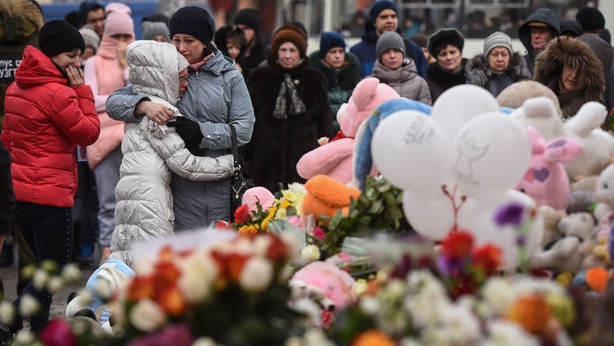 Alexander Bastrykin, head of Russia's Investigative Committee, which handles major crimes, told Mr Putin the fire alarm system in the shopping centre had been out of order since 19 March and that a security guard had not turned on the public address system to warn people to evacuate the building.

He said five people had already been detained.

Asked by Mr Putin why the doors of three cinemas had been locked with people inside, Mr Bastrykin said investigators were still checking, but that one theory was that it had been done to stop people without a ticket getting inside.

"Most of the staff ran away and left children and parents and their children to their fate," said Mr Bastrykin. " ... those workers who should have been responsible for people's safety, for organising an evacuation, they were the first to run away."