The German and French leaders have urged Russia to exert "maximum pressure" on Syria for an "immediate" implementation of a UN ceasefire in the war-ravaged country, according to the German government.

German Chancellor Angela Merkel and French President Emmanuel Macron stressed in a telephone call with Russian President Vladimir Putin "that it is crucial that the (UN) resolution be implemented quickly and comprehensively," Ms Merkel's office said in a statement.

The UN Security Council demanded a 30-day truce across Syria yesterday, as one of the deadliest air assaults of the seven-year war pounded the rebel enclave of Eastern Ghouta, outside Damascus. 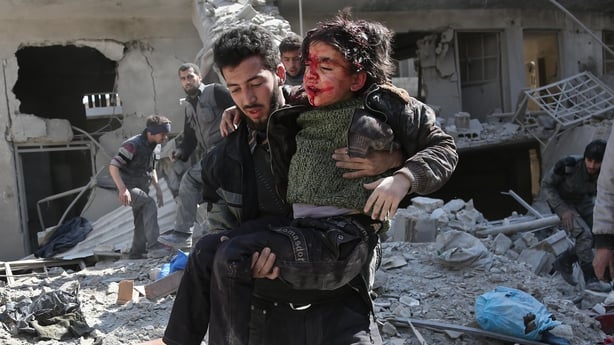 German Chancellor Angela Merkel and French President Emmanuel Macron stressed in a telephone call with Russian President Vladimir Putin "that it is crucial that the (UN) resolution be implemented quickly and comprehensively," Ms Merkel's office said in a statement.

"They call on Russia in this context to exercise maximum pressure on the Syrian regime to achieve an immediate suspension of air raids and fighting."

The statement said Ms Merkel, Mr Macron and Mr Putin had all welcomed the UN resolution on an at least 30-day ceasefire "particularly to allow humanitarian aid into and evacuations out of the war zone".

Ms Merkel and Mr Macron stressed that a ceasefire could be "the basis to advance efforts toward a political solution in the context of the UN-led Geneva peace process".

"Germany and France continue to be willing to work with Russia and other international partners toward this goal," Ms Merkel's office added.

The clashes on the edges of Eastern Ghouta killed at least 13 members of pro-regime forces and six fighters from the Jaish al-Islam rebel group, the Britain-based Syrian Observatory for Human Rights said.

"Violent clashes are taking place in the Al-Marj area, which is a frontline" of the rebel-held enclave near Damascus, Observatory head Rami Abdel Rahman said.

"They are the most violent clashes to take place since the beginning of the month," he added.

Mohamed Alloush, a key figure in the Jaish al-Islam, tweeted that the rebels were "resisting" against bids by regime forces to enter the region.

More than 500 civilians have been killed in a bombing campaign launched a week ago by regime forces on Eastern Ghouta. 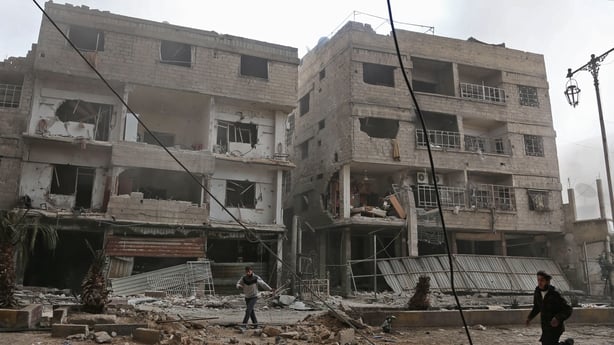 According to the Observatory and a Syrian pro-regime newspaper, the clashes are aimed at paving the way for a ground offensive by government forces against Eastern Ghouta.

"We will adhere to the ceasefire resolution, Syria will also adhere. Parts of the suburbs of Damascus, which are held by the terrorists, are not covered by the ceasefire and clean-up (operations) will continue there," the semi-official news agency Tasnim quoted Iran's military chief of staff General Mohammad Baqeri as saying.

"As the text (of the UN resolution) says, parts of the suburbs of Damascus, which are specifically controlled by the terrorists of the Nusra Front and other terrorist groups, are not subject to ceasefire," Mr Baqeri said, according to state news agency IRNA.

Earlier, the UN Secretary General, Antonio Guterres, called for the immediate implementation of the ceasefire.

Mr Guterres said "efforts to combat terrorism did not supersede an "absolute obligation", he said, by all sides to protect civilians.

In separate statements, Jaish al-Islam and Failaq al-Rahman, pledged to protect aid convoys that come into the besieged rebel enclave near Damascus.

The insurgents said they would commit to a truce, but would respond to any violation by the Syrian government and its allies.