The US and Russia have urged Turkey to show restraint in its air and ground offensive against Kurdish forces in northwest Syria.

Turkey launched Operation Olive Branch at the weekend as it looks to crush the US-backed Kurdish YPG in the Afrin region on Turkey's southern border.

The operation has opened a new front in Syria's multi-sided civil war and could threaten US plans to stabilise and rebuild a large area of northeast Syria, which is beyond President Bashar al-Assad's control.

A new front has opened up in Syria's long running, multi-sided civil war. Turkey has advanced into the north west of the country, specifically into the Afrin region.

It launched airstrikes on 20 January and Turkish ground troops followed a day later. They crossed the border into Syria alongside thousands of Free Syrian Army (FSA) fighters. Turkey has called the campaign Operation Olive Branch.

Who is Turkey fighting against?

Turkey is targeting the YPG, a Kurdish militia, who control much of northeast Syria. The YPG have been armed by the United States as part of the broader fight against the Islamic State group. Turkey considers the YPG to be allies of the Kurdistan Workers' Party (PKK), which has fought against the Turkish state for decades. It describes both groups as terrorist organisations.

The YPG has denied any direct military or political links with the PKK, while the US has rejected Turkey's portrayal of the group. 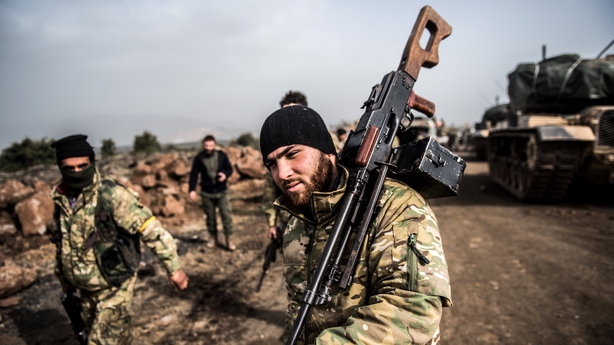 Why is Turkey launching a military operation now?

The YPG is part of an alliance, made up of a number of ethnic Arab militias, called the Syrian Democratic Forces (SDF). Together they have captured huge tracts of territory from IS fighters.

On 13 January, it emerged that the US was helping the SDF to build a new "border security force". US officials said the plan was to train about 30,000 personnel (half of them SDF fighters) to help prevent infiltration by IS militants across the Turkish and Iraqi borders.

The announcement enraged Turkey. President Recep Tayyip Erdogan said that he considered this border force to be a "terror army".

Turkey now says it wants to establish a 30km "safe zone" in Afrin to prevent a "Kurdish corridor" from being established along its border.

What’s been the international reaction to the move?

Syria's government has objected to the incursion, calling it a "blatant attack" on its sovereignty.

Russia, has said the operation is a step towards the partition of Syria. But Turkey has claimed it got the go ahead for the campaign from Moscow. Russian authorities have not confirmed this. However, Russia controls the region's air space and it has not acted to prevent the operation. In addition, Moscow has pulled its own troops out of the Afrin area.

The United Nations has said it is deeply concerned for the more 300,000 people in Afrin and is ready to help displaced civilians if required. Up to 5,000 people have fled the violence so far.

Is this conflict likely to last long?

Turkey has said the operation will be brief but so far the YPG has said that Turkish backed forces have not succeeded in taking any territory in Afrin.

In addition to Afrin, the Turkish President Recep Tayyip Erdogan has pledged to drive the SDF from the town of Manbji in the east. This raises the prospect of a protracted and even more complicated conflict.

The United States does not have forces in Afrin but it does in Manbij. If Turkey does go ahead with a military operation in Mabji, it raises the possibility of conflict between forces allied with Turkey and the US.

The US and Turkey are NATO allies but they have diverging interests in the Syrian civil war.

Washington is focused on defeating IS, while Ankara is anxious to prevent Syria's Kurds from gaining autonomy and fuelling Kurdish insurgents at home in Turkey.