It comes after he admitted making "misleading" statements about allegations pornography was found on his Commons computer in 2008.

In a letter to Mr Green, Mrs May said that she had asked him to resign and she accepted his resignation with "deep regret".

He will leave his role as First Secretary of State after a review found he had breached the ministerial code.

It follows the November resignation of Michael Fallon as defence secretary amid Westminster sleaze allegations and the departure of international development secretary Priti Patel over undisclosed meetings in Israel.

Mr Green has described allegations that he downloaded or viewed pornography on his parliamentary computer as "unfounded and deeply hurtful", but admitted he had not been clear in his past statements on the issue.

He said he "regrets" having been asked to resign and apologised for breaches of the ministerial code.

In a letter to Mrs May, he said: "From the outset I have been clear that I did not download or view pornography on my parliamentary computers.

"I accept that I should have been clear in my press statements that police lawyers talked to my lawyers in 2008 about the pornography on the computers, and that the police raised it with me in a subsequent phone call in 2013.

"I apologise that my statements were misleading on this point.

"The unfounded and deeply hurtful allegations that were being levelled at me were distressing both to me and my family and it is right that these are being investigated by the Metropolitan Police's professional standards department."

Mrs May said she had "carefully considered" the findings of an investigation by Cabinet Secretary Jeremy Heywood into statements Mr Green made on 4 and 11 November.

She said: "This falls short of the Seven Principles of Public Life and is a breach of the ministerial code - a conclusion which has been endorsed by Sir Alex Allan, the independent adviser on ministers' interests.

"While I can understand the considerable distress caused to you by some of the allegations which have been made in recent weeks, I know that you share my commitment to maintaining the high standards which the public demands of ministers of the crown.

"It is therefore with deep regret, and enduring gratitude for the contribution you have made over many years, that I asked you to resign from the government and have accepted your resignation." 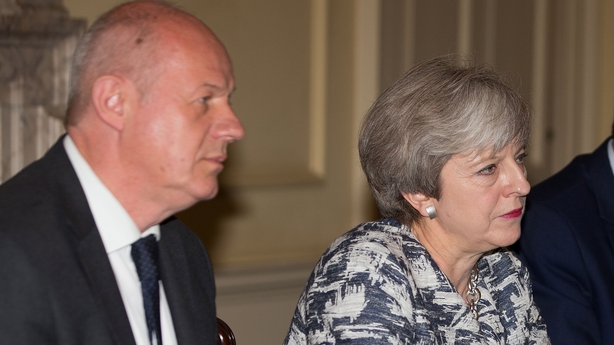 The inquiry was triggered after journalist Kate Maltby, who is three decades younger than Mr Green, claimed he "fleetingly" touched her knee during a meeting in a pub in 2015, and a year later sent her a "suggestive" text message after she was pictured wearing a corset in a newspaper.

The cabinet secretary said that with "competing and contradictory accounts of what were private meetings" it was "not possible to reach a definitive conclusion on the appropriateness of Mr Green's behaviour with Kate Maltby in early 2015, though the investigation found Ms Maltby's account to be plausible".

Overall, Mr Green's conduct as a minister "has generally been both professional and proper", it said.

"I deeply regret the distress caused to Kate Maltby following her article about me and the reaction to it," he said.

"I do not recognise the events she described in her article, but I clearly made her feel uncomfortable and for this I apologise."