Four men have gone on trial in Hungary charged with murdering 71 refugees found suffocated to death in the back of a lorry at the height of Europe's migrant crisis in 2015.

The one Afghan and three Bulgarian defendants walked into the court room packed with journalists and onlookers, accompanied by police wearing full face masks.

The refugees from Syria, Iraq and Afghanistan - 59 men, eight women and four children - were found crammed into the small, unventilated vehicle, abandoned on the side of a motorway in Hungary's neighbour, Austria. 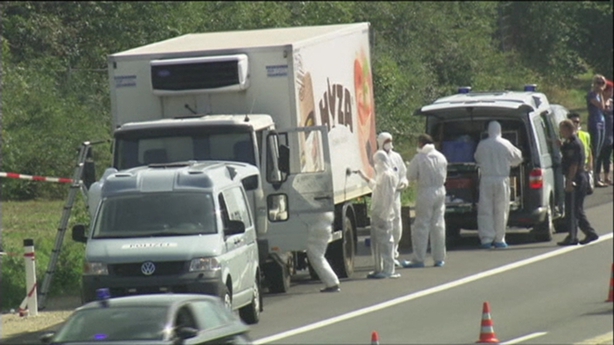 Their deaths shocked Europe as it struggled to cope with the biggest influx of migrants since World War II.

"The 71 victims due to the small space, inability to move, a lack of air and overheating ... died shortly after they set off on the journey. Before their death they continuously banged on the walls of the lorry and shouted," the court said in a statement posted on its website before the hearing.

It was the worst incident seen on the overland route across the Balkans, where hundreds of thousands of people were making their way from the Middle East, Africa and southern Asia up to the richer countries of western Europe.

The trial is taking place in Hungary as authorities say that is where the refugees died, at the beginning of their trip into Austria.

The four defendants are also charged with trafficking other migrants over several months alongside seven other men.

Only six of those, all Bulgarians, appeared in court in the Hungarian city of Kecskemet.

Authorities said one is still on the run.