Ivanka Trump has said she is still in the process of defining her role as an informal White House adviser to her father Donald, and wanted to use her influence to help empower women.

During a podium discussion in Berlin at a women's summit organised by the Group of 20 major economies, Ms Trump said she is still defining how she could make an impact and trying to learn from others.

Asked whether she represented the president, the American people or her business, she replied: "Well certainly not the latter, and I am rather unfamiliar with this role as it is quite new to me too, it has been a little under 100 days."

She later added: "This is very early for me. I'm listening, I'm learning, I'm defining the ways in which I think that I'll be able to have impact. I'm seeking the counsel .. . of informed and thoughtful women and men and I'm really striving to think about how best to empower women in the economy, both domestically and across the globe."

Ivanka Trump is seen as an increasingly important influence on her father, but her appointment as an adviser, with access to classified information, was highly unusual for the daughter of a president.

Seeking to allay ethics concerns, the 35-year-old said last month she would serve in the White House in an unpaid, informal role.

At the Berlin event, she discussed support for women entrepreneurs with German Chancellor Angela Merkel and International Monetary Fund head Christine Lagarde, among others. 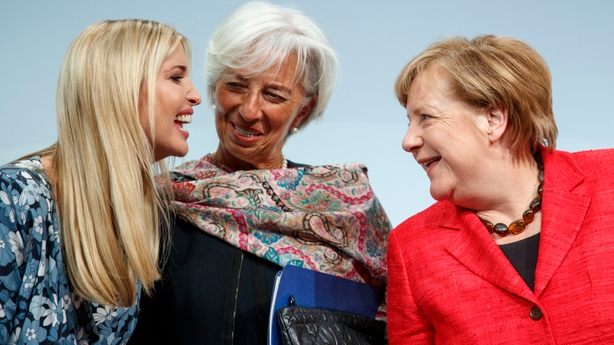 Last month she was pictured sitting next to Ms Merkel during the German leader's visit to Washington, which was characterised by awkward body language between the president and the chancellor as they tried to play down their differences on issues such as trade.

During the Berlin discussion, Donald Trump tweeted that he was "proud" of Ivanka for "her leadership on these important issues".

During last year's presidential election, Mr Trump found himself at the centre of a furious controversy when a 2005 video emerged in which he boasted about grabbing women's genitals.

Asked about whether some of the attitudes expressed by her father might beg the question whether he really wanted to empower women, Ivanka said her personal experience, as well as that of thousands of women who had worked with or for President Trump, showed he believed in women's potential.

Some groans from the audience as Ivanka Trump defends her father at the G20 women's summit in Berlin. pic.twitter.com/mb8jeE22CK

"I grew up in a house where there were no barriers to what I could accomplish ... there was no difference for me and my brothers and I think as a business leader you saw that and as a president you'll absolutely see that," she said.

Her visit has provoked strong media interest. The newspaper Berliner Zeitung, which has described her as "the president's whisperer", said German officials would "certainly be hoping that the president's daughter will convey a positive image of Germany to her father as a result of her short visit".

Another paper, Tagesspiegel, opined that Mr Trump's dependence on family members - also including her husband Jared Kushner, a chief presidential adviser - was like a "vote of no confidence" in everyone else he was surrounded by.