US Secretary of State Rex Tillerson said there was a "low level of trust" between Moscow and Washington after talks with his Russian counterpart Sergey Lavrov.

"There is a low level of trust between our two countries," Mr Tillerson said at a news conference following the talks.

"The world's two foremost nuclear powers cannot have this kind of relationship."

Mr Lavrov said Moscow is open to dialogue with Washington despite tense relations between the countries.

"Despite the quantity of existing problems... there are considerable prospects for joint work," Mr Lavrov said.

"Russia is open to this, open to dialogue with the US in all different areas, not only to dialogue but to joint action aimed at results in the areas where this corresponds to the interests of both countries."

"Today the president confirmed our readiness to return to its implementation on the understanding that the original aims of the air forces of the American coalition are reaffirmed, namely the fight with IS and Al-Nusra," Mr Lavrov said.

Putin: Trust between US and Russia eroded under Trump

Russian President Vladimir P'Loutin earlier said that trust has eroded between the United States and Russia under President Donald Trump.

As Mr Tillerson sat down for talks this afternoon, a senior Russian official assailed the "primitiveness and loutishness" of US rhetoric, part of a volley of statements that appeared timed to maximise the awkwardness during the first visit by a member of Mr Trump's cabinet.

"One could say that the level of trust on a working level, especially on the military level, has not improved but has rather deteriorated," Mr Putin said in an interview broadcast on Russian television moments after Mr Tillerson sat down with Mr Lavrov in an ornate hall. 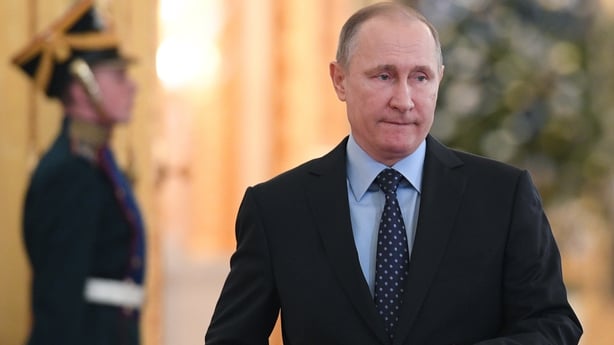 Mr Putin doubled down on Russia's support for Syrian President Bashar al-Assad, repeating denials that Mr Assad's government was to blame for the gas attack last week and adding a new theory that the attack may have been faked by Assad's enemies.

"I won’t hide the fact that we have a lot of questions, taking into account the extremely ambiguous and sometimes contradictory ideas which have been expressed in Washington across the whole spectrum of bilateral and multilateral affairs," Mr Lavrov said.

"And of course, that’s not to mention that apart from the statements, we observed very recently the extremely worrying actions, when an illegal attack against Syria was undertaken."

One of Mr Lavrov's deputies was even more undiplomatic.

"As a whole, the administration's stance with regards to Syria remains a mystery. Inconsistency is what comes to mind first of all."

Mr Tillerson kept to more calibrated remarks, saying his aim was "to further clarify areas of sharp difference so that we can better understand why these differences exist and what the prospects for narrowing those differences may be."

"I look forward to a very open, candid, frank exchange so that we can better define the US-Russian relationship from this point forward," he told Mr Lavrov.

After journalists were ushered out of the room, Mr Lavrov's spokeswoman, Maria Zakharova, wrote on her Facebook page that US journalists travelling with Mr Tillerson had behaved as if they were in a "bazaar" by shouting questions to Mr Lavrov.

A Kremlin spokesman said Mr Tillerson might meet Mr Putin later today if the two top diplomats decided it would be useful to brief the Russian president on their talks.

But the spokesperson too did not hold back his criticism, saying calls from Western powers for Russia to cut support for Assad amounted to giving terrorists a free hand.

Russia's hostility to the Trump administration figures is a sharp change from last year, when Mr Putin hailed Mr Trump as a strong figure and Russian state television was consistently full of effusive praise for him.

The White House has accused Russia of trying to cover up Mr Assad's use of chemical weapons after the attack on a town killed 87 people last week.

Mr Trump responded to the gas attack by firing 59 cruise missiles at a Syrian air base last Friday. The US warned Russia, and Russian troops at the base were not hit.

The meeting between Mr Lavrov and Mr Tillerson comes on the same day the UN Security Council is due to vote on a draft resolution demanding that the Syrian government cooperate with an investigation into the suspected chemical attack last week in Idlib province.

Russia is reported to have threatened to use its veto to block the measure.

Diplomats have said the outcome of the resolution will be decided during the talks in Moscow.

Britain, France and the US put forward the revised resolution following the suspected sarin gas attack in the rebel-held town of Khan Sheikhun that left dozens dead. 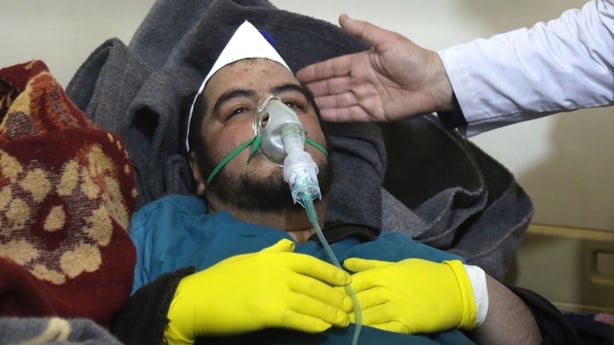 The Organisation for the Prohibition of Chemical Weapons has dispatched a fact-finding mission to Syria.

The UN Organisation for the Prohibition of Chemical Weapons Joint Investigative Mechanism is also investigating alleged chemical weapons use to determine who is responsible.

Russia has stood by Mr Assad, saying the poison gas belonged to rebels, an explanation the US dismisses as beyond credible. Mr Putin said that either gas belonging to the rebels was released when it was hit by a Syrian strike on a rebel arms dump, or the rebels faked the incident to discredit Mr Assad.

Mr Trump came to the presidency promising to seek closer ties with Russia and greater cooperation fighting against their common enemy in Syria, the so-called Islamic State.

Mr Tillerson is a former oil executive who was awarded Russia's Order of Friendship by Mr Putin.