The Netherlands has issued a new travel warning to Dutch citizens in Turkey urging them to take care amid a bitter row between the two countries.

"Since March 11, 2017 there have been diplomatic tensions between Turkey and The Netherlands. Stay alert across the whole of Turkey and avoid gatherings and crowded places," the foreign ministry said in its warning.

Amid an escalating crisis, which erupted over the weekend, Turkish President Recep Tayyip Erdogan has warned The Netherlands would pay for blocking his ministers from holding rallies to build support for a vote on expanding his powers.

The Dutch foreign ministry said there was a safety risk in travelling to Turkey, and said citizens could register with the ministry ahead of travel.

"Across the whole country there is a high risk of terrorist attacks," it added, particularly warning against travel to the borders with Syria and Iraq. 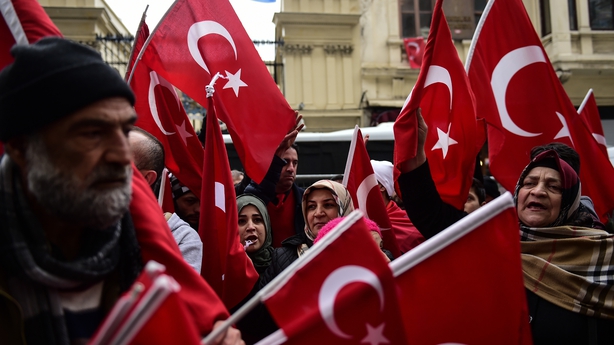 Hundreds of people demonstrated outside the Dutch embassy in Istanbul on Saturday, after the Dutch government banned Turkish Family Minister Fatma Betul Sayan Kaya from attending a pro-Turkish government rally in Rotterdam.

She was subsequently expelled from the country.

Protests also erupted late on Saturday in Rotterdam, when hundreds of people angered by the decision took to the streets and waved Turkish flags.

The row has erupted just days before Dutch general elections, already marked by a polarising debate over immigration and integration.