The German government has told the Philippine ambassador that comments by President Rodrigo Duterte likening his deadly crime war to Hitler's efforts to exterminate Jews were "unacceptable".

Mr Duterte, 71, won elections in May in a landslide after a campaign dominated by his pledge to eradicate drugs in society by killing tens of thousands of people.

In comments earlier, he drew parallels between his campaign to wipe out the drug problem and Adolf Hitler's genocidal drive.

"Hitler massacred three million Jews. Now there are three million drug addicts (in the Philippines). I'd be happy to slaughter them," Mr Duterte told reporters in his home city of Davao.

"If Germany had Hitler, the Philippines would have ...," hesaid, pausing and pointing to himself.

"But you know, my victims, I would like to be (sic) all criminals to finish the problem of my country and save the next generation from perdition."

The German foreign ministry said in a statement that it had asked the Philippine envoy "to come to the ministry for a discussion on this issue".

"Any comparison of the singular atrocities of the Holocaust with anything else is totally unacceptable," ministry spokesman Martin Schaefer told reporters earlier and reiterated in the statement.

Germany has expressed serious concerns about Mr Duterte's crackdown, which has left more than 3,000 people dead in three months and threatened a breakdown of the rule of law in one of Asia's most chaotic democracies. 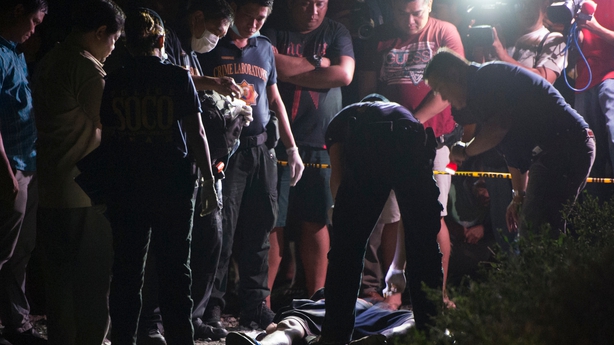 The ensuing violence has attracted a barrage of criticism from Western governments and rights groups, which have warned of widespread extrajudicial killings as the rule of law crumbles.

US President Barack Obama, UN chief Ban Ki-moon and the European Parliament have all voiced concern.

A UN rights expert also warned last month that his call for drug suspects to be killed violated international law.

But Mr Duterte has reacted defiantly, and often with abusive language, to all criticism.

In a rambling speech this morning, Mr Duterte said he was under threat of being brought before an international court for genocide, but insisted he was breaking no laws in the Philippines.

"You are portrayed or pictured to be some, a cousin of Hitler. And you do not even bother to find out, to investigate. Imagine that, I will be facing ... even the international court for genocide. That's foolish," he said.

Mr Duterte also attacked the European Union and the United States for alleged inaction on the migrant crisis emanating from the Middle East.

"You US, EU. You can call me anything. But I was never into or I am never into hypocrisy like you," he said.