All 13 people on board a helicopter that crashed off the coast of western Norway have died in the accident, rescue services said.

The Super Puma chopper, transporting North Sea oil platform workers, went down around midday in the archipelago off the coast of Bergen, Norway's second-biggest city.

Broadcaster NRK reported that 11 of those on board were employed by Norwegian oil and gas company Statoil ASA.

Eleven Norwegians, one Briton and one Italian were in the helicopter.

Eyewitness Rebecca Andersen told Norwegian newspaper Verdens Gang that the helicopter's rotor blades "came rushing toward us", before she heard "a violent explosion". 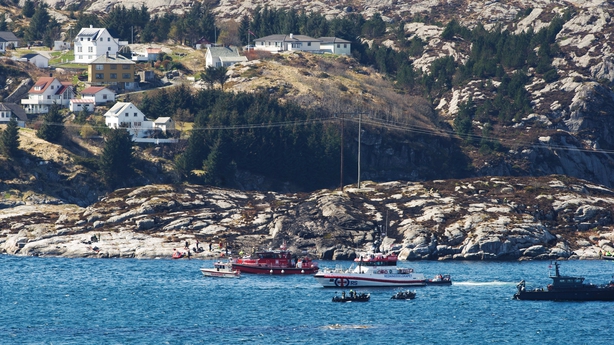 A British Foreign and Commonwealth Office (FCO) spokesman said: "We have offered our support to the family of a British national who has sadly died in a helicopter crash in Bergen, Norway.

"Our thoughts are with all those affected."

A team from the UK's Air Accidents Investigation Branch (AAIB) will travel to Norway tomorrow to assist with the investigation because it has carried out inquiries into several crashes involving helicopters operating to and from offshore oil and gas fields in recent years.

Production at the Statoil-operated Gullfaks B platform in the North Sea has been shut for an undetermined period following the helicopter crash, a senior company official said.

"Production is shut at Gullfaks B so that we can take care of the (platform) staff in the best way possible," Statoil's head of development and production in Norway, Arne Sigve Nylund, told a news conference.

Partners in the field include Austria's OMV and Norwegian state-owned firm Petoro.