Pope Francis led the world's 1.2 billion Roman Catholics into Easter celebrations last night by urging them not to lose hope.

"Let us not allow darkness and fear to distract us and control us," Francis said in a homily at an evening Easter vigil Mass in St Peter's Basilica.

The Holy Week services leading up to Easter, already the most sombre in the Christian liturgical calendar because they commemorate Jesus' betrayal and death by crucifixion, have been further dampened by the attacks in Brussels that killed at least 31 people.

The Pope condemned them several times during the week and at a Good Friday service in Rome, saying that followers of religions who carried out acts of fundamentalism or terrorism were profaning God's name.

But hope was the theme of last night's service. The Pope used the word about 20 times in his brief homily, woven around the Christian belief that Jesus rose from the dead three days after his crucifixion.

"May the Lord free us ... from being Christians without hope, who live as if the Lord were not risen, as if our problems were the centre of our lives," he said. 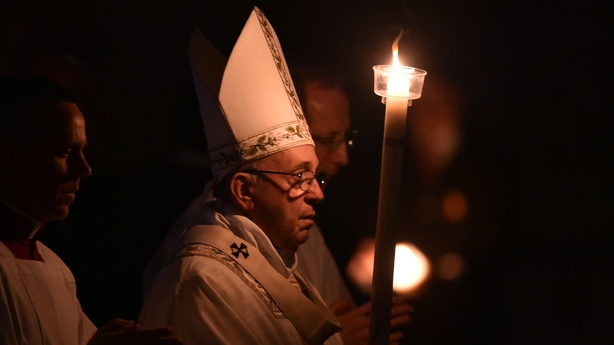 At the start of the service, the basilica was in darkness to signify Jesus' tomb before his resurrection.

Then the pope, cardinals, bishops and members of the congregation lit candles and finally the basilica's lights were turned on.

In his fourth Easter season since his election in 2013, Francis also baptised 12 adult converts to Catholicism, including six Albanians and one Chinese.

Italy has stepped up security at what the government deems "sensitive sites" following the Brussels suicide bomb attacks by Islamic State militants.

Dozens of police have been checking people several times as they approach St Peter's Basilica and subjecting those with entry tickets to body and bag searches and metal detectors.

Security sources said police reinforcements had arrived in Rome from other Italian cities.

Islamic State militants have made threats against Catholic targets in Rome.

Last year, a website used by militants ran a photo montage showing the movement's black flag flying from the obelisk at the centre of St Peter's Square.