Turkey recovered the body of a Russian pilot from northern Syria and presented it to Russian diplomats, five days after shooting down his warplane in an incident that damaged relations between two of the main powers involved in Syria's war.

A coffin carrying Oleg Peshkov arrived by ambulance on the tarmac of Hatay Airport in southern Turkey near the Syrian border.

It was flown to the capital Ankara, where according to Russia's RIA news agency it was met at an airfield by Moscow's ambassador and military attache.

The Russian embassy declined to comment and Turkish officials did not immediately disclose when the body would be repatriated to Russia.

One of the two pilots aboard the plane which was downed on Tuesday was shot dead in Syria after parachuting from the burning aircraft, while the second was found safe.

"In accordance with their [Russian] religious tradition, funeral arrangements were carried out by Orthodox priests in Hatay," Turkish Prime Minister Ahmet Davutoglu said.

Turkey's military said the Su-24 bomber was shot down by two of its F-16s after it violated Turkish airspace ten times within a five-minute period on Tuesday.

Russia however said no warning had been given and that the aircraft did not violate Turkish airspace, and has demanded an apology.

The incident has led to a sharp deterioration of relations, with Moscow, a major trade partner and Turkey's largest energy supplier, yesterday announcing a package of economic sanctions against Turkey.

"Turkey's relations with Russia is based on mutual benefit and common interests. Therefore I urge the Russian authorities to take this into consideration and act in a cool-headed way," he said when asked about the sanctions. 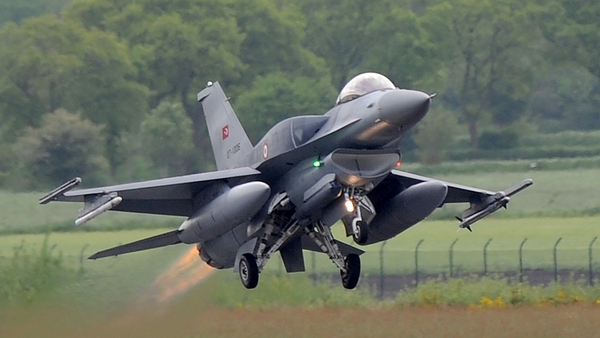 Russia says pilot was shot dead while parachuting from jet