Italy's coast guard has confirmed it has recovered the body of a man who threw himself off a burning ferry in the Adriatic, confirming the first casualty of the high-seas disaster.

The coast guard said the man's body was aboard a patrol boat and was being taken to the Italian port of Brindisi.

Air crews are lifting passengers off the burning ferry, which is adrift in the Adriatic Sea.

Attempts are being made to rescue as many of the hundreds trapped on-board as possible before nightfall as storms hampered seaborne operations.

Helicopters are taking passengers off the Italian-flagged Norman Atlantic in pairs and transferring them to a nearby vessel, officials said.

There are differing accounts of how many people had been rescued from the ferry, which was carrying almost 500 passengers and crew when it sent a distress signal early this morning after fire broke out on its lower deck.

Greek authorities said 131 people were clear of the danger zone and an official said 150 had managed to get off the ship aboard a rescue boat.

Each air transfer was taking around 15 minutes per helicopter, according to a Greek defence ministry official.

Another official said two Italian and two Greek helicopters are involved in the rescue.

Coastguard spokesman Nikos Lagkadianos said the heavy rain that was hampering the rescue had helped contain the fire although the ship was still burning.

Two tugboats were present, one of which had managed to approach the ship to try to extinguish the blaze.

Shipping minister Miltiadis Varvitsiotis said the combination of very bad weather, with winds of up to 88km per hour and the fire, made the operation extremely complicated.

"We are doing everything we can to save those on board andno one, no one will be left helpless in this tough situation," Mr Varvitsiotis told reporters. "It is one of the most complicated rescue operations that we have ever done."

Coast guard officials said the Norman Atlantic, which was also carrying more than 200 vehicles, was 44 nautical miles northwest of the island of Corfu when it radioed for help. 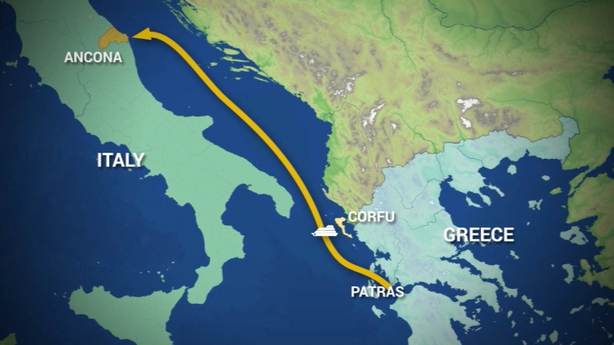 A journalist who was aboard Cruise Europa, a nearby cruise ship, said he could see passengers on the upper deck of the Norman Atlantic clinging to the railings as they waited for rescue.

A coastguard official said nearby passenger and container ships were attempting to form a ring around the burning vessel to try to form a windbreak to allow small rescue boats to approach but rough seas made the manoeuvre difficult.

Mr Varvitsiotis said there were 478 passengers and crew aboard the ship, more than the 466 originally reported.

Of those, he said 268 were Greek, while a foreign ministry official said there were also passengers from several other countries including Germany, Italy, Austria, Turkey, France and the Netherlands. Many appeared to be truck drivers.

One Greek passenger told a television reporter that language differences hindered communication between passengers and crew.

While rescue vessels and aircraft had been dispatched to the scene, early rescue work was being coordinated from nearby passenger and cargo ships. A fire-fighting vessel was trying to approach the ferry.

The fire broke out in the lower deck garage of the vessel but there were differing accounts of when it started. Initial reports said the fire began at around 0600 local time (0400 GMT) but Italian officials put the time at 0430.

Officials said both Italian and Albanian authorities were taking part in the operation, which was being conducted in extremely difficult conditions with strong winds, heavy seas and very cold temperatures.

The Norman Atlantic is a 26,900-tonne, roll-on roll-off ferry chartered by Greek ferry company ANEK, the coastguard said. According to marine traffic data, it was built in 2009 and previously operated in Italy.