Footage from inside the Costa Concordia shipwreck off the Italian coast has been released, days before it is set to be refloated.

The wreck will be refloated within ten days, to be towed away from the Italian island where it ran aground and capsized two-and-a-half years ago.

Thirty-two people died in that catastrophe. The ship's captain, Francesco Schettino, is on trial accused of manslaughter, causing a shipwreck and abandoning ship.

Eerie underwater images shot by police divers show rotting sofas, the majestic columns of a perfume shop and – above water – the ship’s blue and green atrium, with painted pictures of seaside towns and white boats skimming the waves.

A reception area is seen with computers, a wide-screen television screen and a vase of plastic flowers which oddly appear to have survived unscathed as the ship rolled on to its side in a nighttime accident in 2012 and sank.

Books, pillows and other objects litter the decks ground of the enormous vessel, which was twice the size of the Titanic and a life jacket chest with the ship’s name on it gapes empty.

The ship was hoisted upright from its watery grave in September in the biggest-ever salvage operation of its kind, during which the remains of one of two missing victims were discovered.

Engineers have finished attaching the huge tanks to is sides which will be used to float the wreck.

With the arrival of calm summer weather, it is now due to be towed to Genoa to be broken up for scrap.

The last of 30 stabilising devices or 'sponsons' was attached to the wreck yesterday.

Technicians will now start to test all the systems for the final refloating, the Concordia Wreck Removal Project said in a statement.

The organisers said the last phases of the project to remove the 114,500-tonne vessel, the largest maritime salvage in history, would be explained in detail in the next few days. 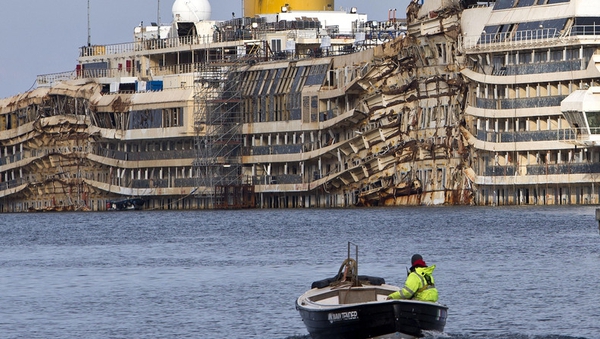